Breaking a Guinness World Record is a dream a lot of people have. However, in breaking our own record, we learned there’s more to it than being fast. It requires planning, marketing and a lot of preparation leading up to the event. Here’s a guide on how to beat a world record, and some of the steps involved.

The steps we’ll cover here include the following:

How to Apply for a World Record 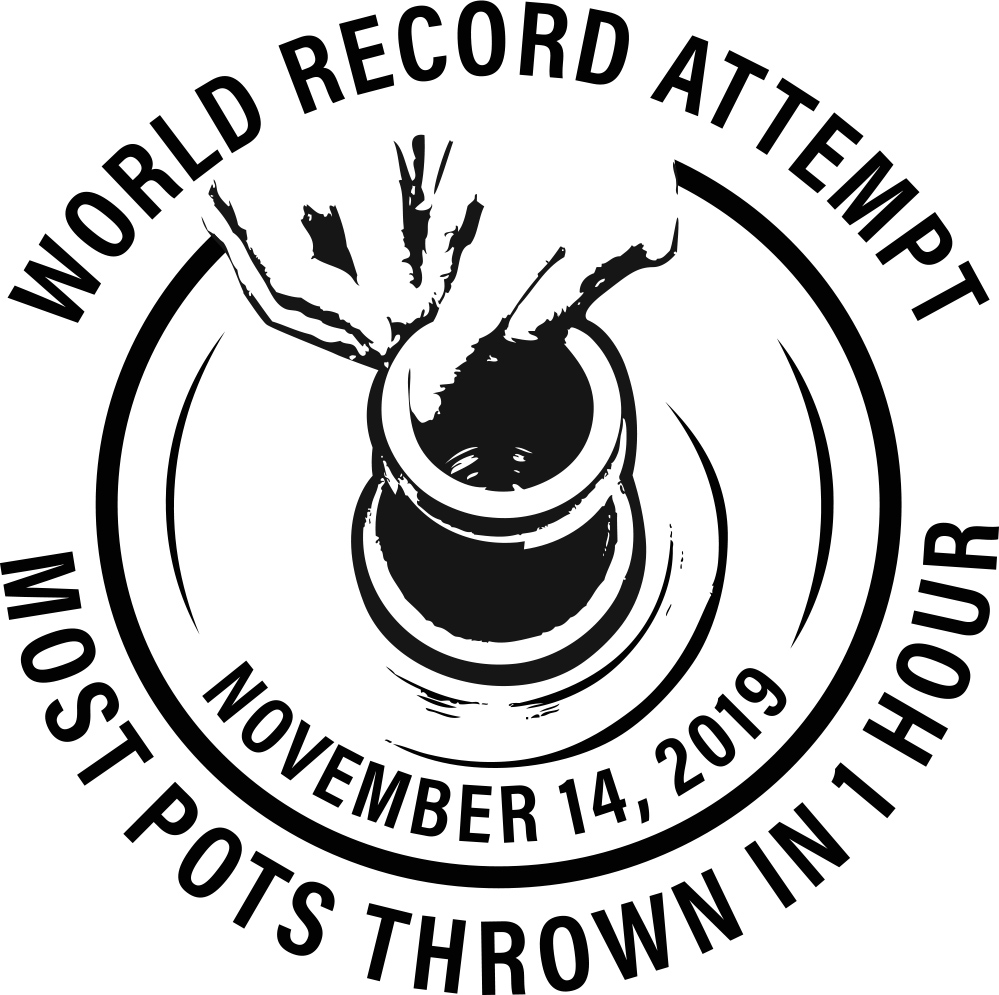 Before you even attempt the world record, you might have to fill out some paperwork. Guinness World Records has an official application for attempts that you can fill out on their website. To apply, simply register for an account with them and apply for a record you’d like to break. Looking to break the world record for the fastest distance traveled on a rocket-boosted skateboard? Apply for a new record title, then consider reevaluating your life choices.

Once you submit your application, the team at Guinness World Records HQ will review it. This can take up to 12 weeks, or even longer when a lot of people are attempting to break or set records. For perspective, Sunset Hill Stoneware started the application process for our potter, Mike Weber’s, world record attempt back in August, and it took several months for us to get the green light to attempt breaking the previous world record. Since the world record for the most pots thrown in one hour by an individual already existed, we didn’t have to wait as long as we would have if we decided to set a new record.

Need the application process expedited because you’re attempting your record at the end of next week? Guinness World Records also offers a Priority Application so you can receive the guidelines for your attempt within five days. However, this comes at a price. For existing titles, Guinness World Records’ Priority Application service costs $800. If you’re attempting the world record to promote your business, it’s an easy way to better ensure you’ll have approval in time for your attempt. If not, you’ve got that much more time to train and practice. 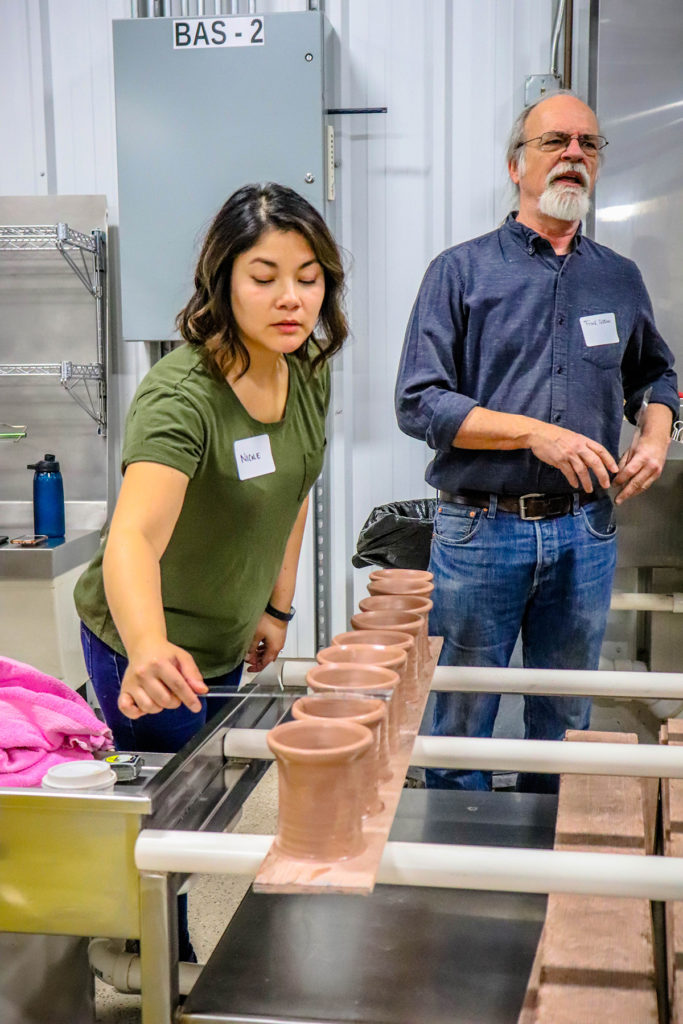 The Evidence Needed for a World Record Attempt

Once you have an approved application, Guinness World Records will send you some guidelines and a guide for submitting evidence of your attempt. These guidelines will change depending on which record you’re trying to break. This is part of why it takes so long for applications to go through. In our case, just a few of Mike’s guidelines included:

For Mike’s attempt, we chose to have two ceramics professors from UW Oshkosh and UW Fox Valley serve as expert witnesses. These two are experts at pottery and measured each pot Mike created to see if it fell within the sizing standards required for the record. For this, they used a ruler that was marked with the correct dimensions so they could quickly tell if each pot meets the requirements. We also recruited a third person to keep a logbook of the number of pots Mike created throughout the attempt.

If you’re doing a timed world record, you’ll also need to find a timekeeper to monitor your progress. Timekeepers should be from a third party. For Mike’s attempt, Sunset Hill Stoneware recruited two timekeepers who normally work at the Oshkosh Community YMCA. All they needed were two standard stopwatches we purchased from a local Walmart. We also borrowed a shot clock from the YMCA so anyone watching in the shop or on our Facebook stream could keep track at home.

Before we submitted the evidence for Mike’s attempt, we also had all of our expert witnesses and timekeepers sign official statements. These statements were binding and required each individual’s signature. After Mike broke the world record, we submitted these witness statements, a cover letter and other key pieces of evidence to GWR electronically to legitimize the attempt.

Lastly, you may want to get some non-experts to serve as additional witnesses. These witnesses must be from a third party, and thus cannot be family, coworkers or any other stakeholders in your world record attempt. Since we announced to several news outlets that Mike was attempting to break a world record, their crews fulfilled our need for witnesses.

How Much Does it Cost to Get a World Record?

In short, it can cost a lot. For more of a breakdown though, it depends on what kind of services you use to get your record on the books. Guinness World Records has a starter package for attempts that allows for priority application and evidence services, plus use of their branding and logo for the attempt. Currently, that costs $4,000 total. While it might seem like a steep price, it’s worth it for getting public attention, especially if you’re looking to get a media presence. It’s also worthwhile if you don’t have 24 weeks to wait for approval or results.

Depending on where or how you want to use GWR’s branding, there may be additional fees. Using their branding in video requires an additional fee, which could bring the total up to $6,000.

Want to get an official from Guinness World Records to adjudicate your attempt? They can do that. But, their services cost a minimum of $12,000. In some cases, it might even go up to $20,000.

However, we should note that one benefit in most of these packages is the expedited process. If you just want to have the bragging rights of being a world record holder without having any GWR branding or paying for an expedited process, you can do it without shelling out large sums of money. You’ll just have to get the process started early and be ready to wait a while. 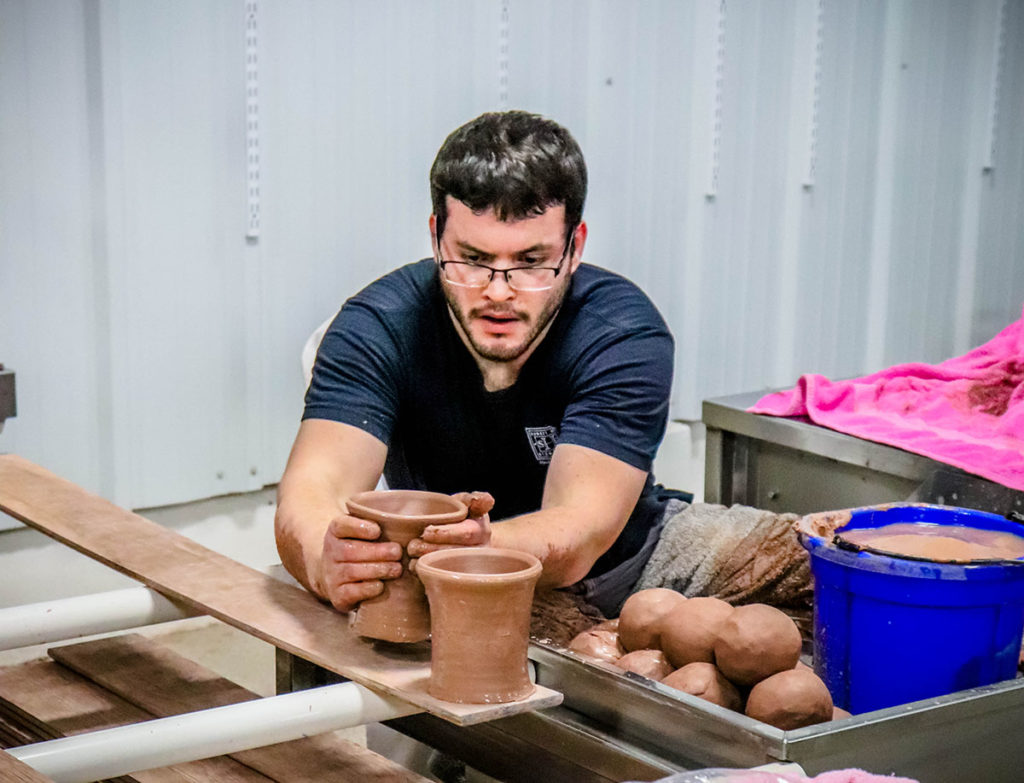 Training for a World Record

Mike started training months before his world record attempt. Like one would train for a marathon, Mike began by building up his endurance. Along the way though, he needed to make some changes from how our plant manager, Jason Sonsthagen, trained him.

Since he doesn’t create the pots he threw for his world record as part of our catalog, he had to adjust his method so that he could throw the clay, pull it into the proper shape and cut it off the wheel with a wire within a matter of seconds.

Although he was already one of our fastest potters, finding ways to shave seconds off his attempt was a core part of his training. One of the biggest differences he made was shaping each slug of clay into a sphere so it was easier to manipulate quickly. He also marked his water bucket so he could easily tell if he was within the required dimensions.

Mike also had a small team acting as his pit crew during his attempt. These three fellow potters fed him round slugs of clay, set down boards for him to use for his completed pots and taking them away once he filled them. Without having to worry about these factors, Mike could focus on just throwing.

In the days leading up to the attempt, he could throw one pot in 15 seconds. However, the moment of truth would come on Nov. 14, 2019. 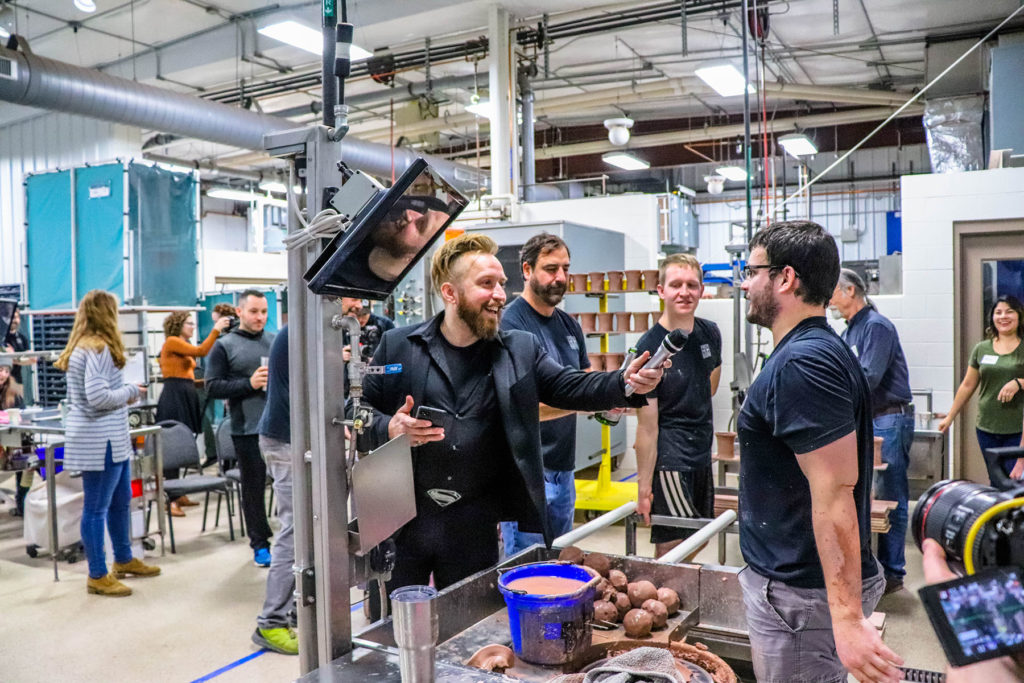 Mike and his crew came to the shop around 5 a.m. that morning. This not only gave him the chance to mentally prepare himself, but also to talk to reporters and coordinate with his pit crew.

By his own admission, Mike was nervous in the hours and minutes leading up to his attempt. But, he was also excited. Needless to say, he didn’t sleep much the night before the big day.

Once the clock struck 7 a.m., Mike was off. After overcoming his nerves with the first few pots, Mike found a steady pace. Only a handful of his pots weren’t up to our experts’ standards. By his own admission, Mike told us afterward that he slowed down during the middle of the attempt. However, he managed to rally near the end with the support of his pit crew and coworkers watching him work.

By the time the hour was up, Mike threw 212 pots. This shattered the existing record of 193, making Mike the new world record holder.

After Mike broke the record, we donated the bulk of the pots to Girl Scouts of the Northwestern Great Lakes. Additionally, we donated some to a local Boy Scout pack and let our staff have a few of them. Sunset Hill Stoneware did not put any of them up for sale. We did, however, finish them in our Natural Clear glaze so the ridges from Mike’s hands were visible. Mike also numbered the pots and embossed them with our logo. 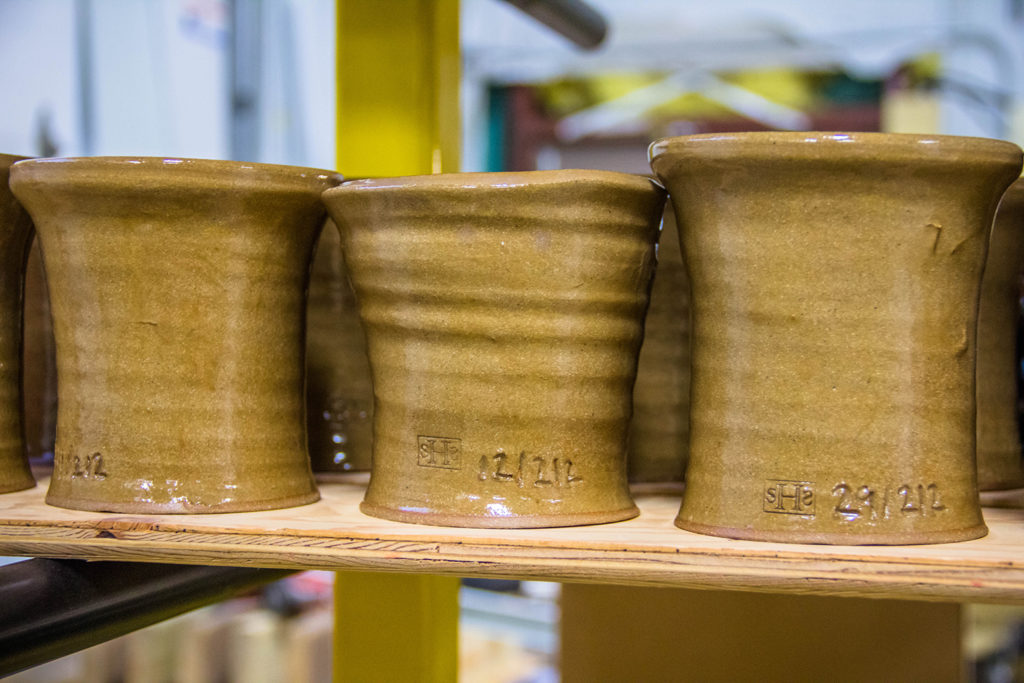 Why Break the World Record

Obviously, there’s cause for celebration in the moments after you break a world record. One of Mike’s coworkers even brought a bottle of champagne for him to uncork after the hour was up. After that though, our witnesses finalized their testimony of Mike’s attempt. Within another week, Guinness World Records updated its website to recognize Mike as the world record holder. It took another four weeks for the official certificates to come in, and approximately five seconds before we mounted them on the wall for all to see.

However, there are more reasons to go for a world record than just bragging rights. Sunset Hill Stoneware gained some serious publicity during Mike’s world record run, including spotlights on the local news and within the pottery industry. It also got both Mike’s name and ours into a featured snippet in Google searches about his world record. As anyone involved in digital marketing could tell you, featured snippets are worth their weight in gold for attracting customers online.

Although Mike has five years of experience, it’s important to know that he had never done pottery before working at Sunset Hill Stoneware. However, he is ambitious and determined. He trained and trained for months to break the world record, and it paid off for him. It’s an honor not only for him, but for Sunset Hill Stoneware as a whole. We’re proud to say he’s a part of our team and now have proof of his achievement to show to the world.