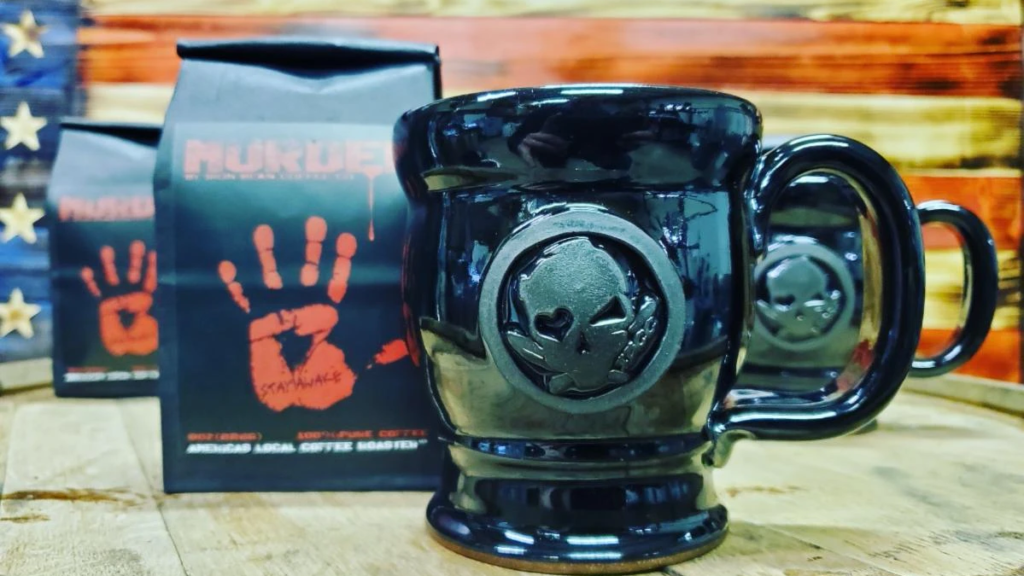 Lots of businesses use their custom coffee mugs to drive sales. However, they also promote brands in ways that business owners tend to overlook. Most businesses don’t use them as an integral part of their branding quite like Iron Bean Coffee Company.

We’ve introduced you to Iron Bean Coffee Company in the past. The company’s footprint has grown since their case study debuted in 2018. So, we decided to revisit where Iron Bean is now. We’ll also take a closer look at the role Sunset Hill Stoneware mugs play in promoting their brand and driving sales. 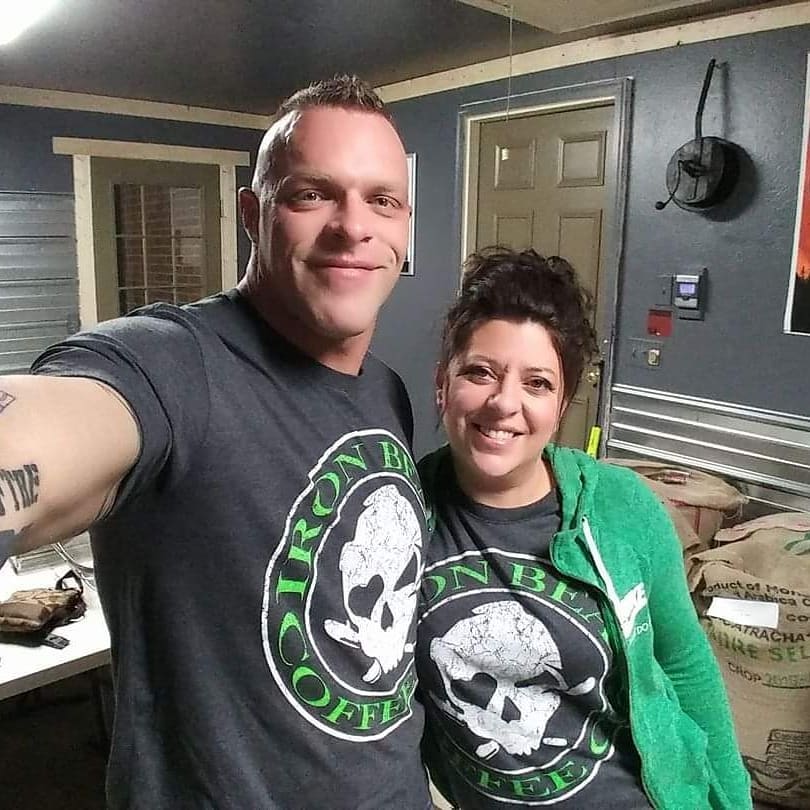 Iron Bean Coffee Company is the brainchild of Fred and Chanell Dedrick, a husband-and-wife duo. These two started the brand like a lot of business owners do: with an unusual idea. For years, they dreamed of opening a coffee shop with a more interactive experience that brought people together. When renting a brick-and-mortar space proved to be cost-prohibitive, they took their efforts to the internet. They officially founded Iron Bean Coffee Company in early 2017 and garnered a following of coffee lovers online.

At first, the couple started out roasting coffee beans the way it’s been done for centuries: Using a cast-iron pan to craft roast their beans. They’ve expanded the business since then. Nowadays, they have a facility with industrial grade roasters to get the job done. While they still offer their Cast Iron roast as an homage to their humble beginnings, Iron Bean also offers dozens of other flavors and roasts to suit any coffee lover.

Even more, their capabilities have expanded since those early days craft roasting beans in their garage. They’ve since hit the road at events in a converted military-grade vehicle called The Roost, expanded into multiple  labels and gained a following of tens of thousands of fans.

Storytelling with Mugs: A Master Class

Iron Bean has the market cornered on using custom mugs to support their most creative ideas. With that, they use their stoneware mugs to tell the story of their two mascots; Nori and Dylan the Viking Poet. These two owls grace almost every Iron Bean mug in some form. Incidentally, they also happen to be lovebirds.

Some of the earliest projects we worked on with Iron Bean showed Dylan and Nori going on their first date and falling in love. They’ve watched fireworks together on the 4th of July. Dylan has even made Shakespearean overtures to Nori while debuting our Rustic Rose glaze for Valentine’s Day. They’ve even shown their shared love of slasher films on Halloween on some special-edition candy bowls.

All of these special releases showcase something that drives much of Iron Bean’s success: their storytelling capabilities. Aside from having Nori and Dylan on their packaging, their stoneware mugs show the full extent of their characters. In turn, Iron Bean’s fans and customers have fallen for the storytelling in these unique designs. 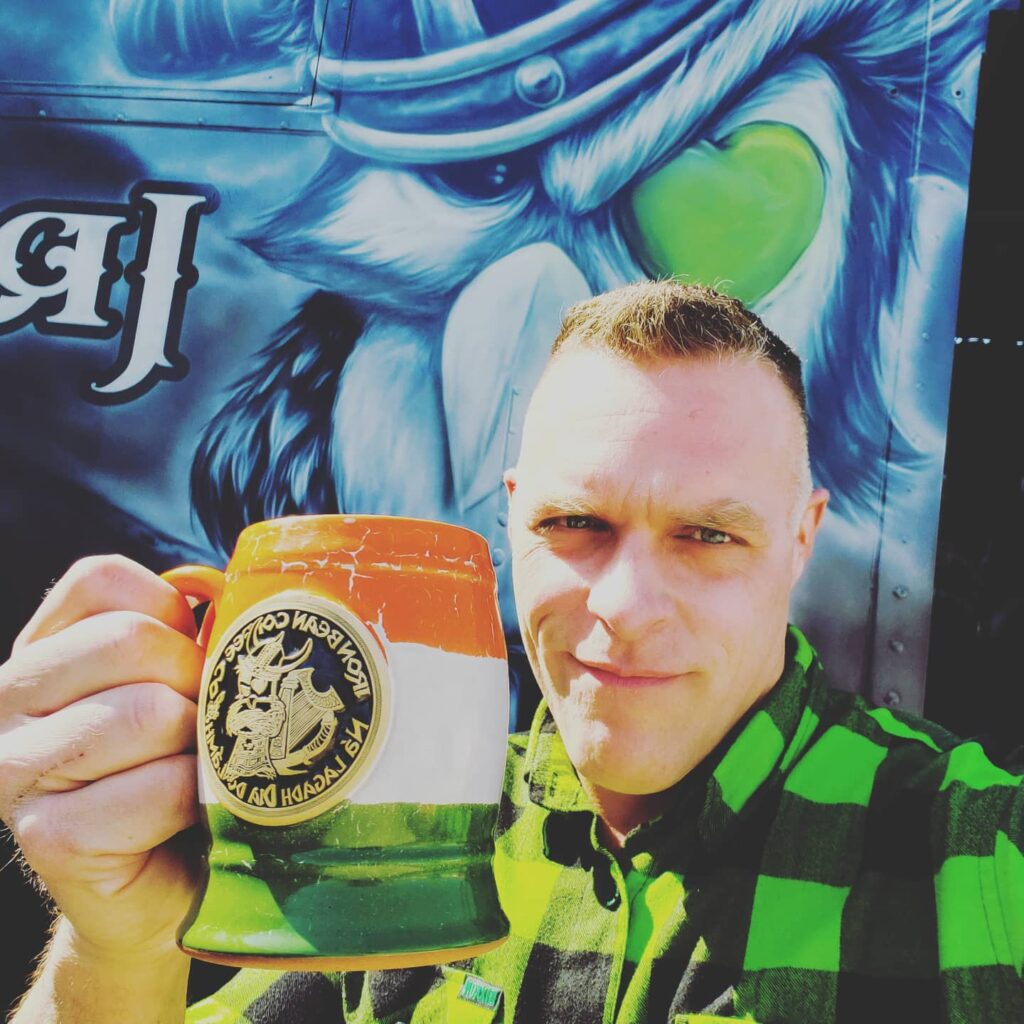 When we’ve spoken with Fred and Chanell in the past, they’ve noted Iron Bean’s coffee mugs are as integral to the brand as the brew itself. They’ve used their branded mugs as an accompaniment for their mainstay roasts like Thor and Odin, in addition to showing off their skull logo and other iterations of Nori and Dylan.

The Bean series is a prime example of this. Every Daybreaker mug they’ve ordered from Sunset Hill has featured their skull logo. It also often includes trailblazing glazes like Brimstone, or our very first black medallions. Even though it’s one of the simpler designs that Iron Bean uses with us, there’s a subtle message about their brand in each piece: They aren’t afraid to push the envelope and go where others fear to tread.

That sense of adventure has rubbed off on us, too. For example, Iron Bean’s experimenting with different color options paved the way for us to develop Blarney Stone. The glaze’s earliest prototype appeared along with Royale Moss on the steins, Ná Lagadh Dia Dó Lamh. For those of us who don’t speak Gaelic, the name is the Irish blessing, “May God Never Weaken Your Hand.”

These steins debuted just in time for St. Patrick’s Day 2019. They also all but guaranteed the Iron Bean fans who received them wouldn’t blink for the next three months. It was Fred and Chanell’s way of thanking their community for bringing them so far within their first two years, and the design was such a hit that it now graces the packaging for Dylan’s Grogg.

Even more, the mugs are also a vehicle for showing the causes that matter to Iron Bean. Seeing as Fred is a U.S. Marine Corps veteran, Iron Bean has paid special reverence to those who have served America’s armed forces through their branding, and their mugs by extension. The most poignant example includes Iron Bean’s debut for Memorial Day 2019, the Some Gave All mugs. In the thematically appropriate colors of Desert Cactus and Old Glory, the Tom’s Mug for this special release featured a medallion shaped like a dog tag. It served as a tribute to not only the 1 percent of Americans who served in our armed forces, but to those who never made it home.

The Common Thread of Branding 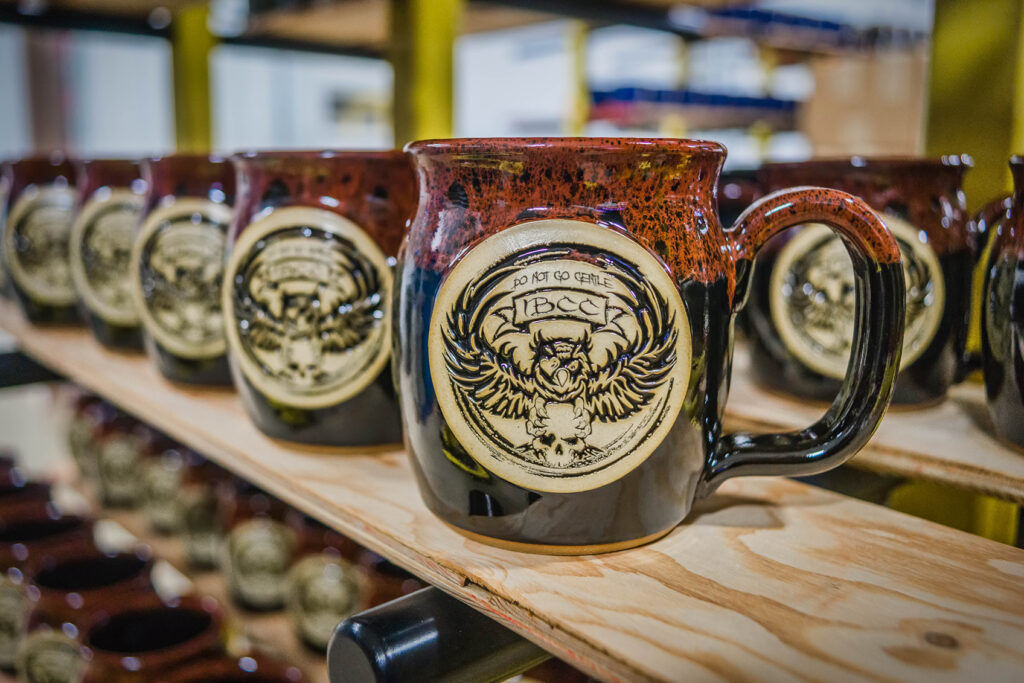 Through all of these special edition releases is a common thread. Iron Bean Coffee Company began with the idea of uniting and uplifting people. It continues to do so through its branded stoneware mugs. This small company uses their mugs to command the presence of a giant, all while elevating the things they care about most: Using their coffee as a way to bring people together.

There are dozens more examples of Iron Bean’s designs promoting their brand, their story and the causes they care about. However, they also let their actions speak just as loudly as their brand. Beyond being among the most caring and creative people you’ll ever meet, Fred and Chanell are the faces of the company. They also interact directly with their customers, even as their business continues to grow. They also have initiatives in place for military and first responder discounts, along with monthly giveaways for a year’s supply of coffee.

Fred and Chanell have been working with Sunset Hill since the earliest months of Iron Bean’s business. Together, we’ve helped them bring their stories to life, all while getting to flex our own creative chops. Even today, as they continue to develop their next stoneware mug release, we’re looking forward to seeing what they’ll come up with, how we’ll get to bring it to life, and how they’ll use it to keep taking their brand to new heights.