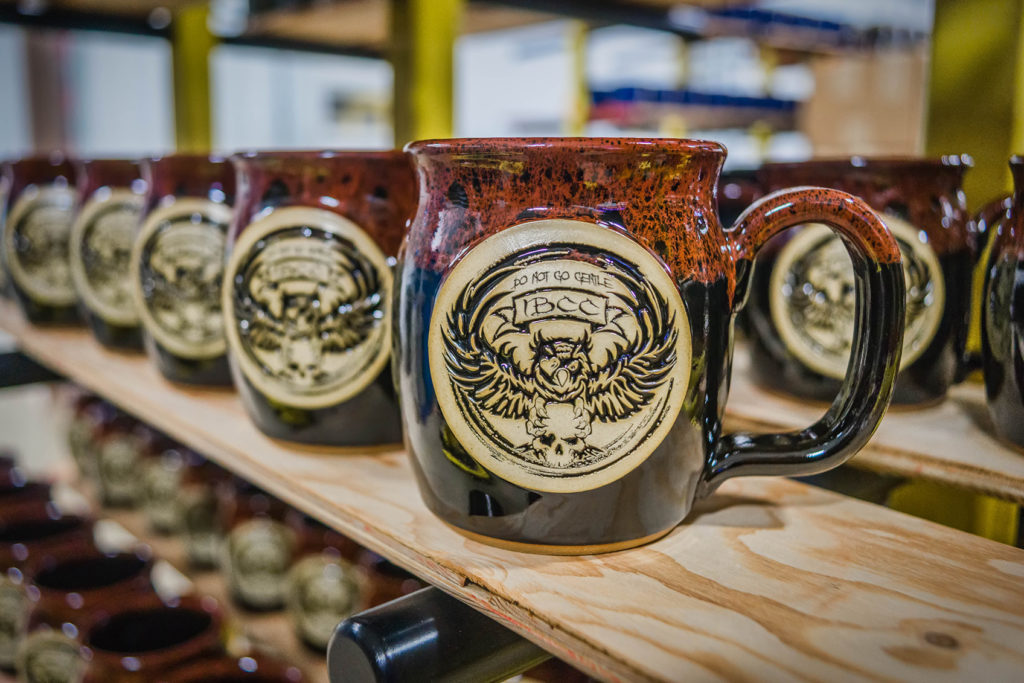 Iron Bean Coffee Company and Sunset Hill Stoneware have been a match made in heaven since late 2017. We’ve worked to bring their unique artwork to life on every Iron Bean Coffee mug for their ever-growing base of loyal fans, but it can be difficult to keep track of every mug we’ve made with them. What’s a collector to do?

Look no further. This collector’s guide will show you all of the handmade mugs Iron Bean Coffee Company has made with Sunset Hill Stoneware since we’ve begun our partnership and where you can find the latest additions for your daily dose of Rage. We will update this blog periodically with Iron Bean Coffee Company’s custom mugs as they introduce new ones. 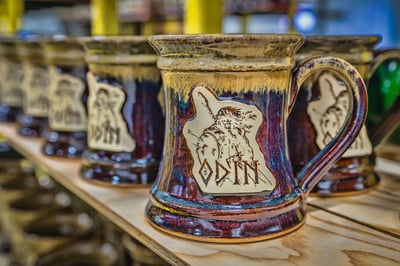 These members of the Norse pantheon were among the first mugs we made for Iron Bean Coffee Company. However, to call them mugs is an understatement—both of these styles are often in breweries. They’re perfect for the moments when you need an extra large cup of coffee to get you through the morning.

The regal, curved stein and subtle blue and brown hues were suited for such a prominent figure in Norse mythology. It was also suitable for Iron Bean’s debut on Sunset Hill Stoneware’s products. The mug was paired with the company’s coffee blend of the same name—a Ugandan single-source dark roast that fuels anyone who drinks it throughout the day.Odin, the king of the Norse gods, was depicted with a shield and spear on our Last Call, one of our more regal stein styles in Root Beer Float.

Debuting at the same time as his father, the Norse thunder god Thor is featured on a Double Barrel stein in Copperhead Run, one of our most popular and striking glaze colors.

A rounder but equally robust style, it complemented Iron Bean’s roast of the same name, a medium-dark Brazilian roast. This blend is available on the company’s website and makes its drinker feel like they have the energy to defend Asgard as Thor did in his legends.

Like the true black sheep of Norse mythology, the stein featuring the trickster god Loki has an intriguing backstory. This Country Classic stein in our ShamRocks glaze was never sold—in fact, all but a few of the original run had to be destroyed.

Originally, this stein was meant to accompany an eponymous Ethiopian Yirgacheffe roast sold on the company’s website and features a masked Loki wielding a sword. However, a copyright dispute arose before the stein came out. 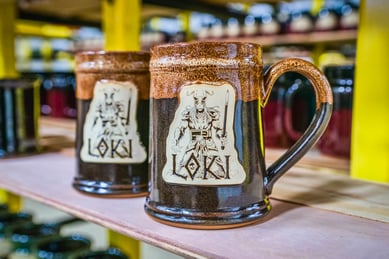 As a show of respect, Iron Bean had us destroy the mugs we made for Loki’s debut.

Iron Bean Coffee Company owners Fred and Channell Dedrick still keep a few of these rare steins in the original ShamRocks and our Irish Stout glaze, but they’re never to be sold. Lucky friends sometimes receive this rare stein as gifts, but they’re hard to come by. 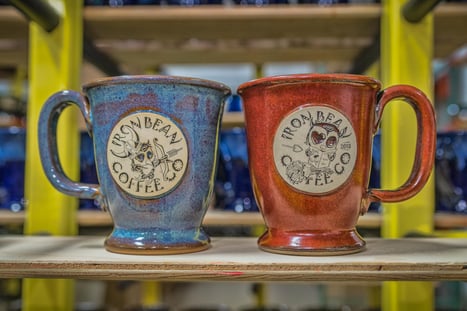 The only two-piece mug set Iron Bean Coffee Company has created with Sunset Hill Stoneware to date, the 2018 Valentine’s Day mugs opened one of the earliest chapters of the love story between the company’s mascots, Nori and Dylan the Viking Poet. In this scene, Dylan fires cupid’s arrows at Nori from one mug to the other while she reads a Valentine card and grips a bouquet of flowers in her talons.

The scene is set on two Morning Rambler mugs, one in Stormy Blue and the other in Sunfire Red. While this is one rare occasion where we created a set, Fred and Channell expressed reservations about creating another. It has less to do with demand and more to do with the husband-and-wife duo not wanting to overcharge.

“We felt like we were taking advantage of the mug collectors,” Fred said in a May 2018 phone interview. However, he and Channell liked the idea of offering the same mug with different color options for future releases. 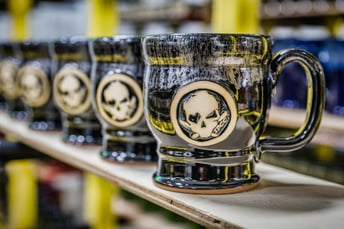 Featured in our Silvery Night and Cranberry Bog glazes, these uniquely shaped mugs flaunt Iron Bean’s skull and crossbones logo on the medallion and flew off the shelves in their first two iterations.

Also known as Bean 2.0, the uniquely shaped Daybreaker in our Silvery Night glaze was Iron Bean Coffee Company’s first handmade mug that featured the roaster’s logo on the front. 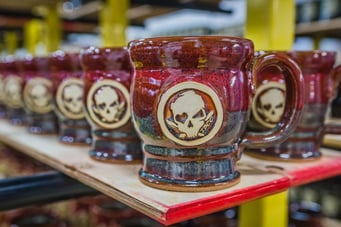 Its sequel iteration had the same logo and unique mug shape, but it was one of the first mugs to debut our red and grayish-green Cranberry Bog glaze, introduced in the summer of 2018.

Since then, Iron Bean Coffee Company has also debuted Bean 4.0 and 5.0. Bean 4.0 featured our Galaxy Night glaze, while Bean 5.0 came in orange-bottomed Brimstone for a twist on its predecessors.

“What happened to Bean 1.0?” you might be asking. Well, we won’t talk about the camper ourselves. Let’s just say switching over to stoneware coffee mugs was a better option for everyone involved.

The Fourth of July

To celebrate America’s Independence Day, Iron Bean Coffee Company continued the love story of Nori and Dylan. This time, it showed them on their first date. The two lovebirds go on a joyride together in a classic 1957 Ford Fairlane to watch the fireworks light up the sky in red, white and blue. 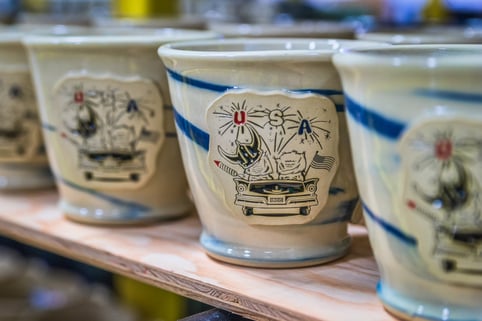 In addition to a classic offering in our Midnight Black glaze, the Fourth of July mug has the distinction of being the first Sunset Hill Stoneware mug made with our white and blue SwirlWare. It was the perfect test run before our potters introduced more colors to our SwirlWare line.

The orders for both colors of these special edition mugs sold out within less than a day. After the initial mug drop, Iron Bean’s fans raved on social media about how much they liked the creative design. They also loved the SwirlWare style and posed with their new stoneware.

While we never know what creative ideas will come to Iron Bean Coffee Company in the future, fans of their handmade coffee mugs and strong brews should be on the lookout for innovative mug styles during future holiday releases. 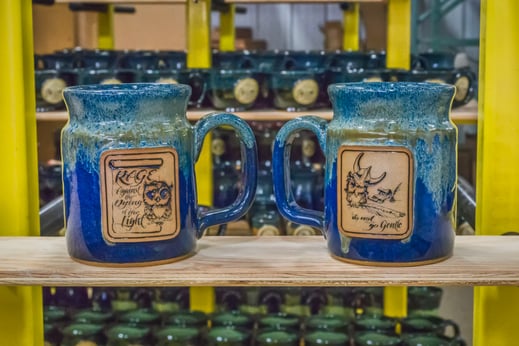 Paying homage to the Dylan Thomas poem Do Not Go Gentle into That Good Night, this unique beer stein is designed for everyone to enjoy, whether you’re right-handed, left-handed or ambidextrous, with medallions on both the front and back of the body.

This Tom’s Taster stein was double-dipped in Northern Lights, another one of our most popular glazes, for a unique and even more distinctive finish. It features lines from Thomas’ poem. It pairs them with Nori and Dylan posing with parchment and quill pens on both sides of the stein.

Given that this was Iron Bean Coffee Company’s first experiment with two medallions, these steins sold out in hours. Whether or not these mugs will have a second edition remains to be seen. 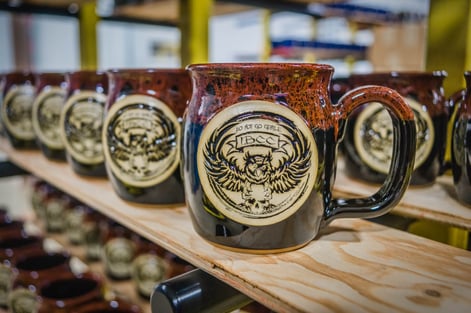 Named after one of Iron Bean Coffee Company’s best-selling roasts, this mug features Nori the owl flying outward, baring her talons around a skull. This design shows a side of Nori that fans don’t normally see as she grabs the day by the skull.

Since Fierce is such a popular blend, Iron Bean offered 500 of these Java Taster mugs in Tigers Eye to their fans for a limited edition run. Seeing as it was a limited edition mug, this will be a collector’s item for years to come. 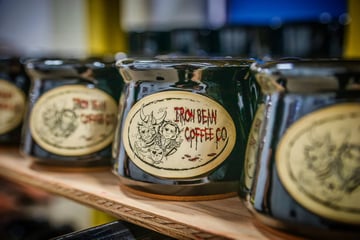 Just in time for Halloween 2018, Iron Bean continued the story of Nori and Dylan’s relationship with a spooky vibe. These showed the happy couple dressed up as some of the scariest characters horror films have to offer. As a creepy added touch, the company’s name has been backfilled with red glaze inside the medallion. The final product looks like blood and is ready for its closeup in a slasher film. 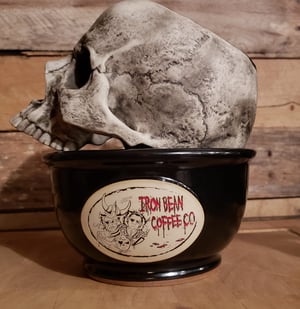 Also debuting with this Potter’s Delight mug is a Midnight Black Good Mornin’ bowl with the same spooky design. However, the bowl was exclusively available to members of the Iron Bean Nation group on Facebook, so anyone interested in limited mug drops like these will have to join the group for a chance to get more exclusive designs like this in the future.

In addition to the Slasher stoneware, Iron Bean Coffee Company also had us make several of the prototypes and experiments. These include a black Good Mornin’ bowl, and a handful of mugs with variations on our Cranberry Bog glaze. These collector’s pieces are even harder to find than the original Halloween bowls themselves. Anyone looking to find them needs to have serious connections with Fred and Channell in order to do so. 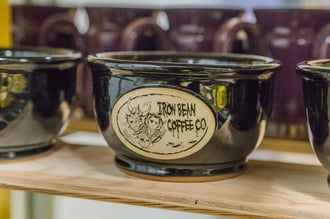 Debuting in our Traveler style with Imperial Purple, the Toon Mug was Fred and Channell’s way of making fans smile. The medallion on this mug was a caricature style that showed the full dynamic between the two masterminds, plus a cameo of Rufus Da Dog. It first debuted in February 2019 and sold out almost immediately. 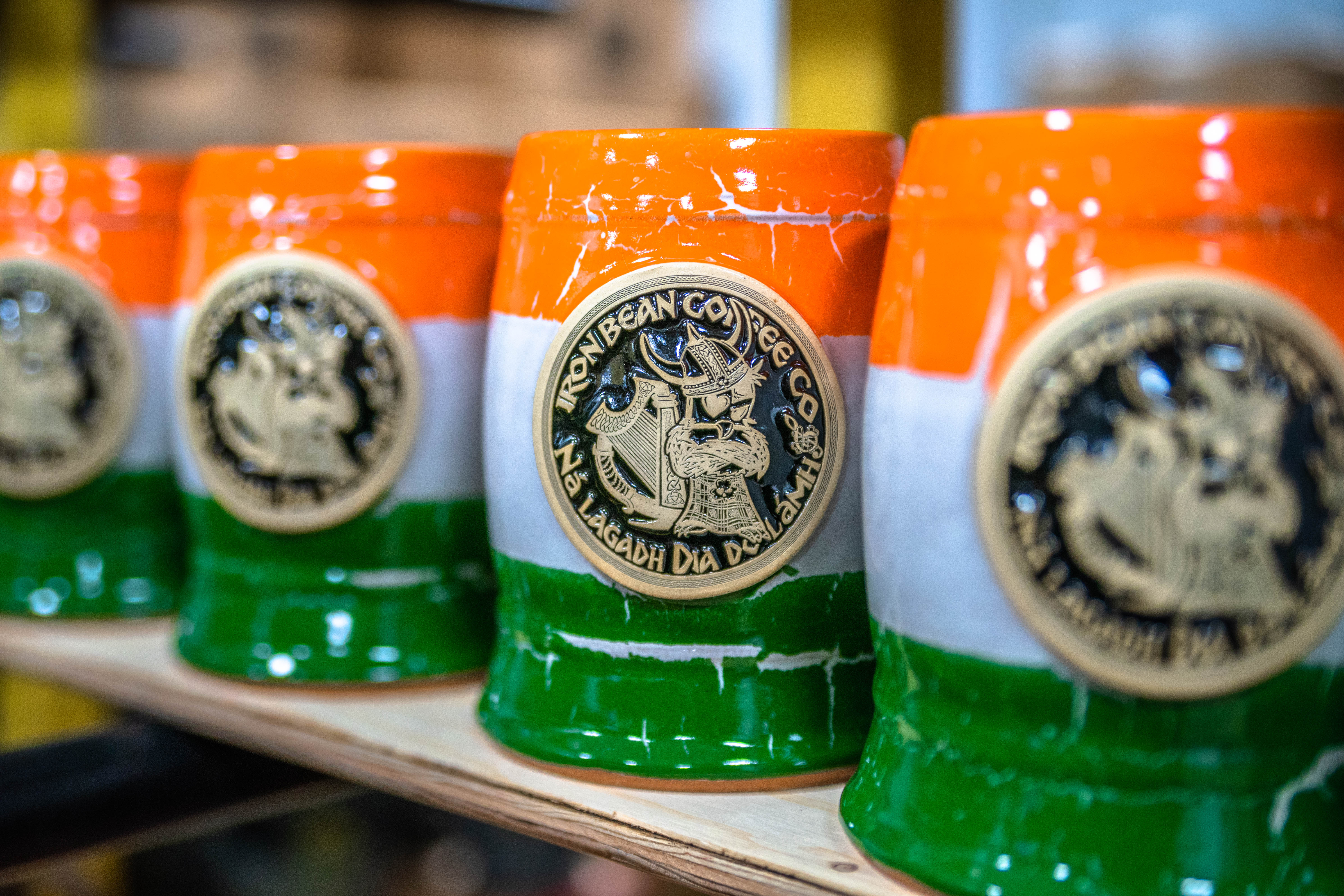 This Irish phrase means, “May God not weaken your hand”. When Iron Bean Coffee Company debuted this stein in the colors of the Irish flag and Royale Moss, they did it to thank their community. The original featured green, white and orange, while the Royale Moss version represented the traditional colors of St. Patrick. At 24 oz., these might seem pretty large for coffee mugs. But, these custom mugs can hold just about anything, including your favorite stout or other drinks.

These mugs premiered for St. Patrick’s Day 2019. The same design is still on other Iron Bean merchandise.

Fred is a veteran of the United States Marine Corps. So, the Sunset Hill Stoneware crew worked with him and Channell to create something symbolic for Memorial Day 2019. Their designer, Joey Hetzel, developed a design in the shape of a military dog tag, with a distressed American flag, burial crosses and symbolism unique to the U.S. Marine Corps. The mugs featured two new glaze colors for us; the tricolor Old Glory and Desert Cactus, a shade based in Oatmeal and topped in green.

The mug was Iron Bean’s tribute to members of the armed forces who gave their lives protecting the United States. We were proud of how these came out, and the symbolism that went into these mugs.

Fred and Channell had another idea in mind for Labor Day. After experimenting with several different designs we sampled for them, they went with a design that depicted Nori in the iconic pose of Rosie the Riveter. Using our Portly Pint in Electric Blue and Midnight Black, this special release showed Nori’s kerchief glazed in red. For a brand describing itself as America’s hardest-working coffee, it felt fitting to show one of the most famous workers in U.S. history.

Iron Bean Coffee Company is always debuting new stoneware for its fans to use. Check back on this page for updates and details about each new mug style whenever they’re announced.