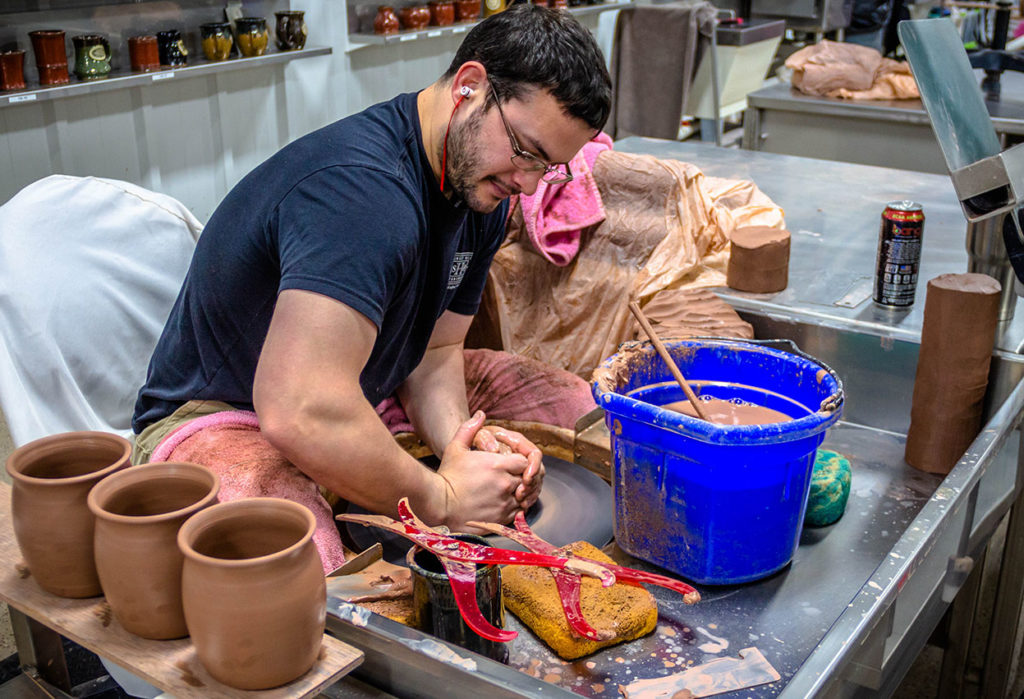 Sunset Hill Stoneware has one of the fastest turnaround times for pottery mugs in its industry, with orders shipping out within 4-6 weeks on average. That means you’ll get your pottery at least a month earlier than you would with any other wholesale pottery company. But how do we do it? There are a lot of people who make this possible, but it starts with the people who give your stoneware shape.

Introducing Michael Weber, a member of our pottery team. With almost five years of experience under his belt, Mike is a lightning-fast potter with an artistic streak. He knows all about the tools and tips of the trade and is more than happy to share a few with the world.

Speed and Accuracy are of the Essence

Mike is known as one of our fastest potters. He can also throw every single piece in our catalog, including many of our retired styles. However, he notes that there are some styles he prefers to make over others. Some of his favorites include our classic Potbelly mug and the Beer Belly stein. Both of these styles feature curves around the middle. He also enjoys making some of our Blue SwirlWare pieces. 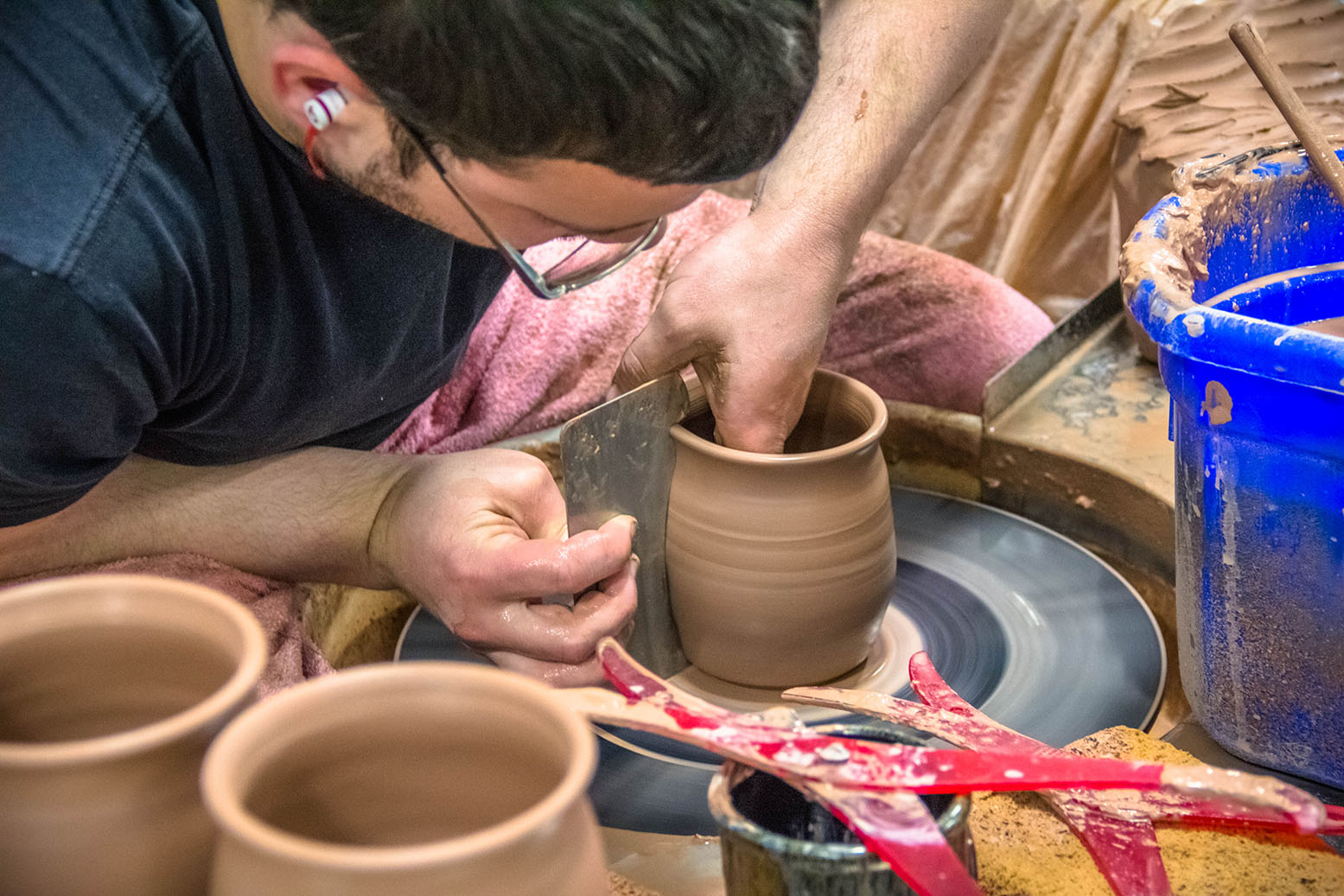 Many of the styles Mike doesn’t like to throw as much are narrower near the top, including the Traveler and the Afternoon Delight. These styles are tricky to throw because they’re narrow near the top and can get super sharp and hard to use if they don’t have a large enough lip, among other complications. Like all of our mugs, they also require the use of special potter’s tools, which smooth its outer walls and give it its final shape.

“You’ve got to set it up to the point where it’s going to fill itself in with the tool, up to a point where you can still actually get your hand in there and fill out the detail,” Michael explained. “It’s weird because you can get a really weird line on the bottom as the mug sinks.”

Luckily for Michael, both of these styles are retired. However, some groups and businesses still order them when they’re looking for something different.

Even these tricky styles don’t slow him down too much though.

“Jason taught me a lot, and I feel like that’s the reason I do more of the harder stuff,” he explained. “It doesn’t slow me down too much. Some potters throw differently. I’m willing to adjust to make it as easy as possible. I want to know how to do everything.”

For the most part, Michael does know how to throw everything. Although there are a few styles that he hasn’t made, like our Vince Lombardi football mugs, he could produce them if he needed to. This is a point of pride for him.

“I’ve got such a cool job,” Michael said. “I put my headphones in and I spin mugs all day.”

A lot of our coworkers at Sunset Hill Stoneware can agree that there are things that set this place apart. Having previously worked for a salvage company with reclaimed wood and other old materials, Michael was impressed with how clean our pottery facility is.

“It’s a really good environment,” Mike said. “It’s crazy the way Duane [Dunsirn] has it all set up. Everything is really neat and clean, and it makes you want to come back.” 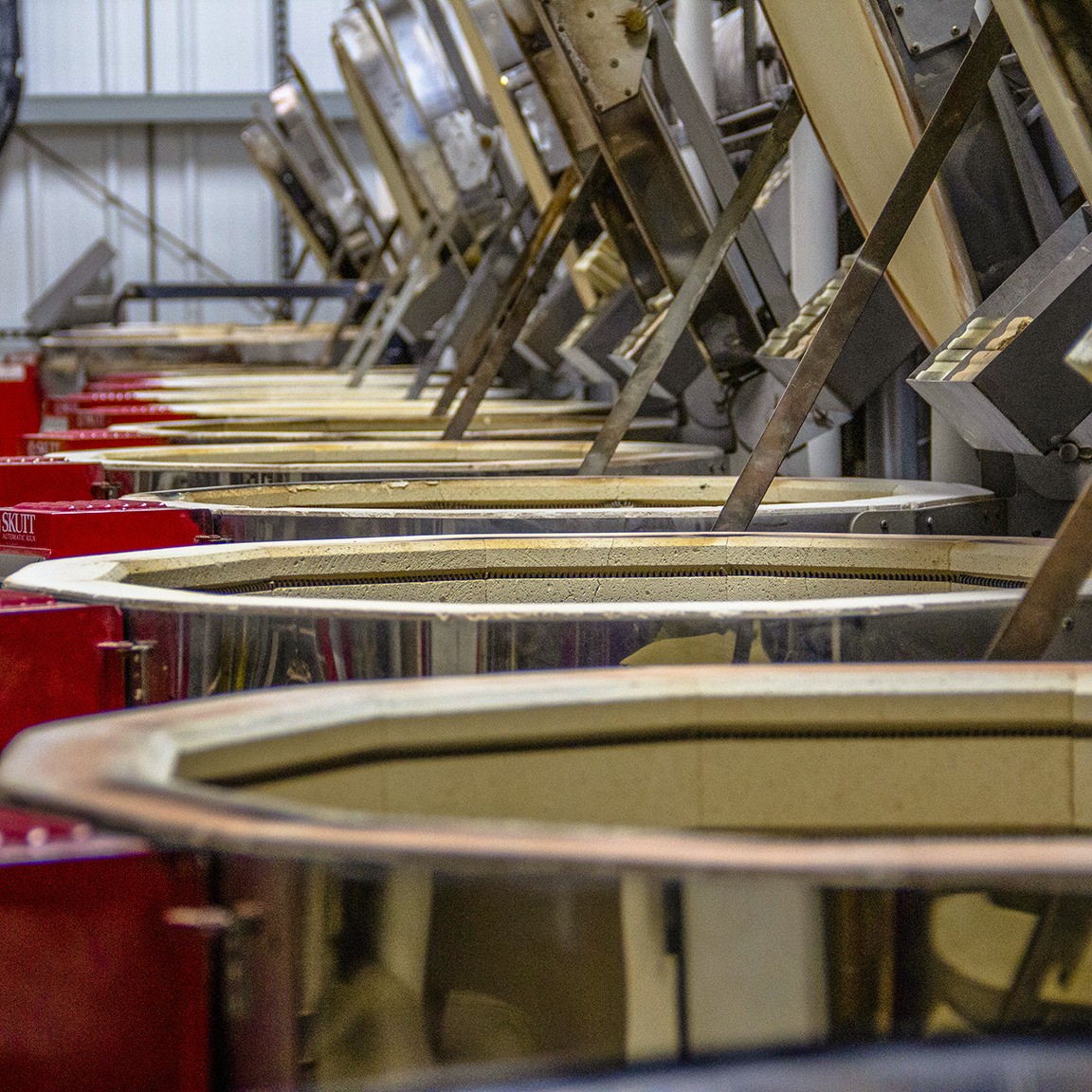 On top of Duane’s customized technology, Michael brought his dedication and determination from day one so he could learn as much as possible. He also didn’t want to let down our master potter and plant manager, Jason Sonsthagen.

“He’s just such a cool dude,” Mike said. “You just don’t encounter good people like that too often.”

Being in good company has helped Michael enjoy his job that much more. Even though most of what Mike does involves working as an individual, he noted that when he and his coworkers open up to each other, it only makes them better as a team. Since there are different methods to throwing each stoneware mug and beer stein style we offer, it helps to stay connected with everyone else in order to find the most effective way to make each piece.

“The job doesn’t change, but the way you do the job changes on a daily basis,” Michael explained.

On the other hand, Michael also has a competitive streak pushing him to be one of our fastest potters in our shop. But, Michael notes that a lot of our potters can keep up the same pace.

“I throw a little more than other people, but Luke and Roy are right up there. Even Eli, given the right style, it’s hard to keep up with that guy,” Michael said. “I just really want to produce.”

However, Michael doesn’t sacrifice quality in the name of speed. Instead, it’s a balancing act to make us one of the fastest companies in our industry while also making sure we turn out the best product we can make every time.

“I’m competitive,” Michael said. “If I’m throwing the same style as somebody else, I want to be a little bit faster with the balance of quality.” 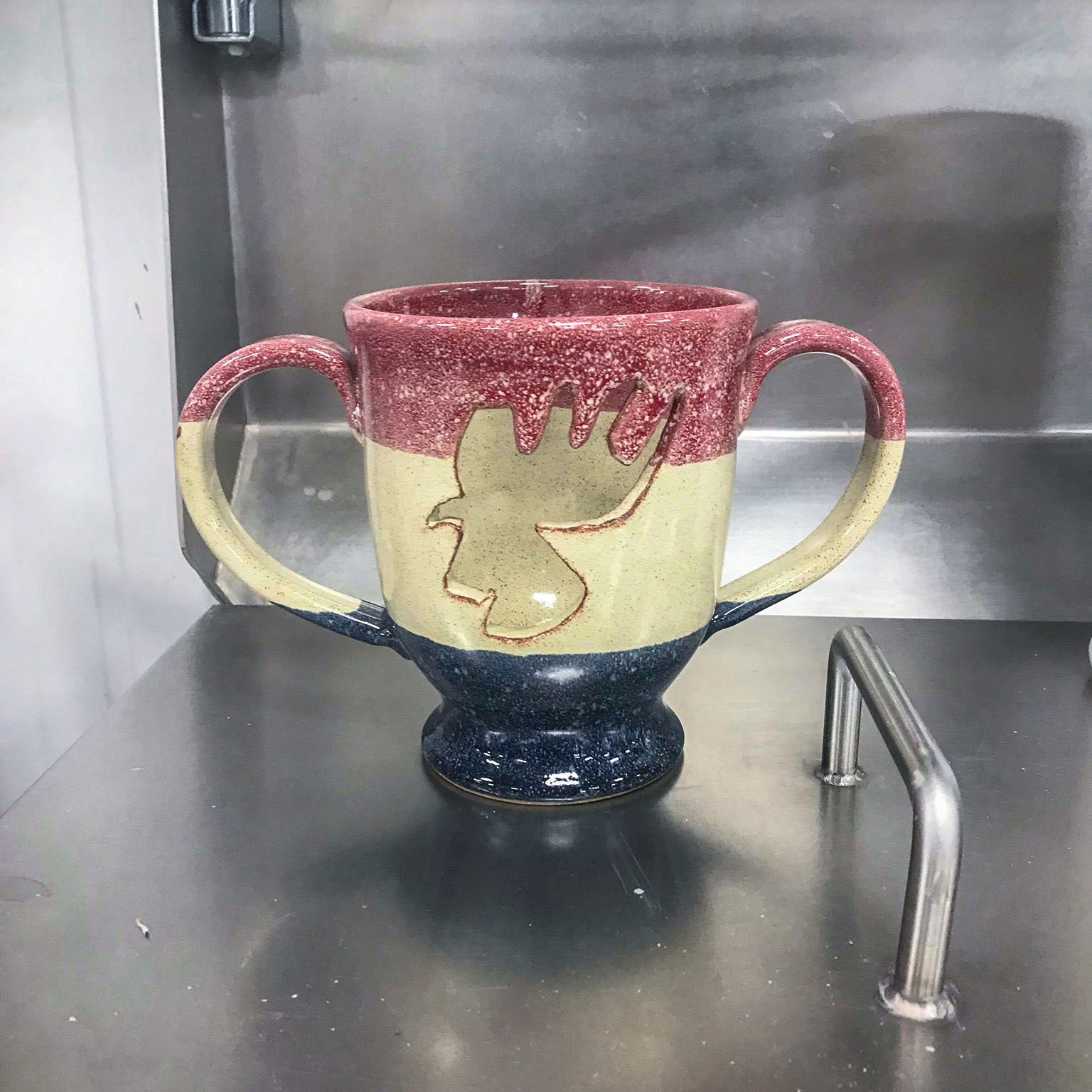 When he’s not working the pottery wheel, Michael also has a unique version of darts that he plays with a group of friends and a larger tournament they’ve held for four times. However, the setup and rules for this dart game are a bit different from what traditional players may be used to.

It starts with a standard dartboard that Michael and his friends spray painted white. From there, they put a series of 16 smaller bullseyes around the main target on the dartboard. The rules include a special scoring system with multipliers and the ability to set other players back on points.

“It’s a lot of fun because you can win in three darts,” Mike said.

With four tournaments already, Mike decided that this league should have its own unique trophy along with a cash prize. So, he threw one himself with a custom rooster shape that he cut out with a fettling knife. This one-of-a-kind trophy also features our Old Glory glaze. The tournament winner’s name will be engraved on the trophy as well.

“A lot of people show up every year,” Michael said. “It’s awesome. I think last time we had 32, so we had two 16-man tournaments going.” 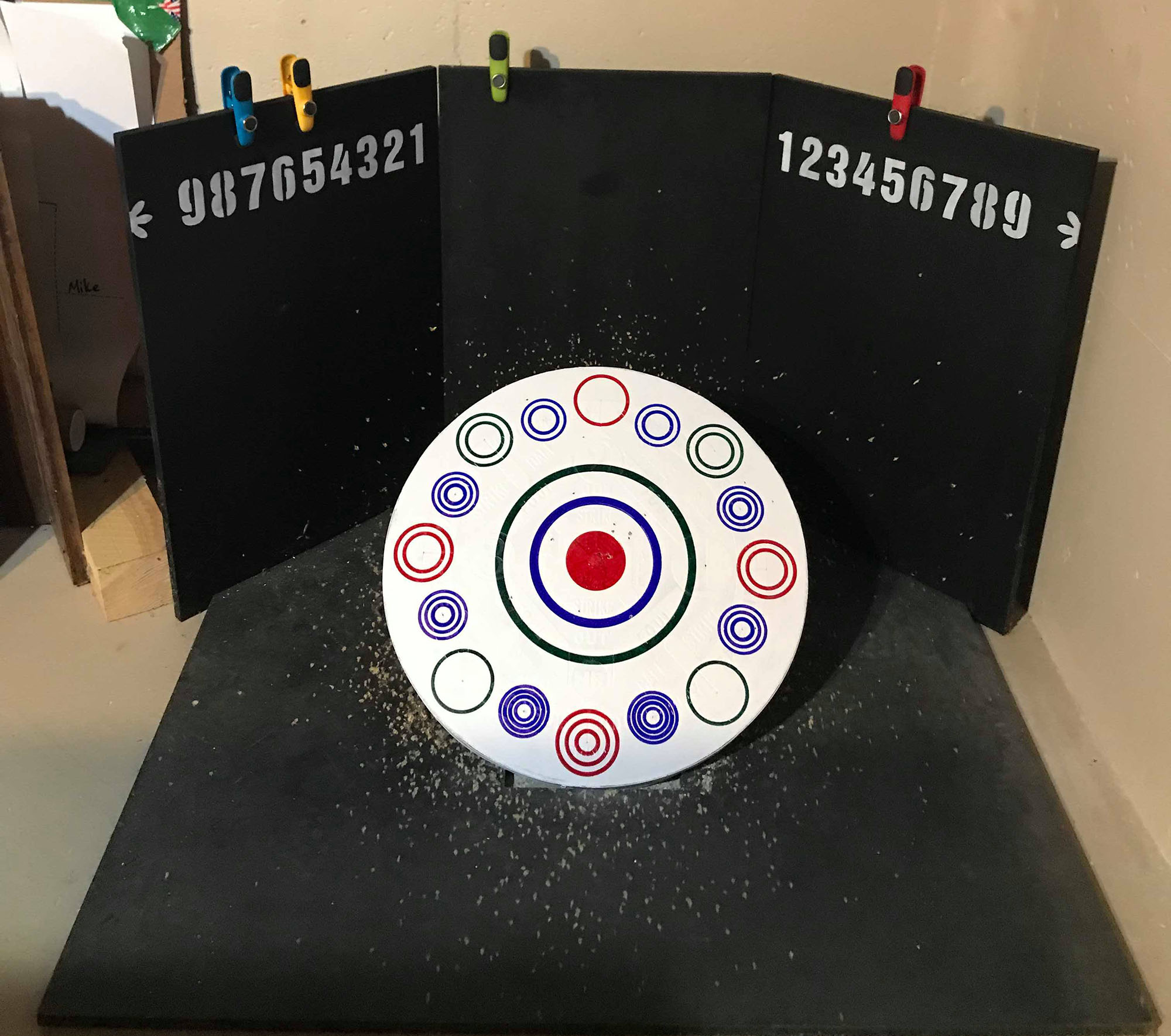 Of course, Mike knew he and his friends wanted to have something memorable as an award for their tournament. After all, a unique game requires an equally unique trophy and a mass-produced award just wasn’t going to cut it.

Mike also sometimes gets chances to throw pottery outside our catalog at local events. At a recent Bazaar After Dark event in Neenah, Michael made a recreation of a Golden Globe award, some bowls, and a pitcher that had a very heavy bottom. These can be difficult to make when you’re used to production pottery, and it takes longer. After all, if there’s too much water in the piece while it’s firing, it could explode in the kiln.

“It’s a lot of fun when you can throw whatever you want, but it takes a lot of time,” Mike said. “When I was throwing that trophy, it took a lot of time. I’m not used to doing more than one pull.”

Keeping the walls of the trophy thick while he was creating the trophy was challenging, too. However, Mike was proud to say that he threw the trophy in just one try. It adds an extra dose of pride to a trophy he already made himself and makes the prize that much more special for the tournament winner. 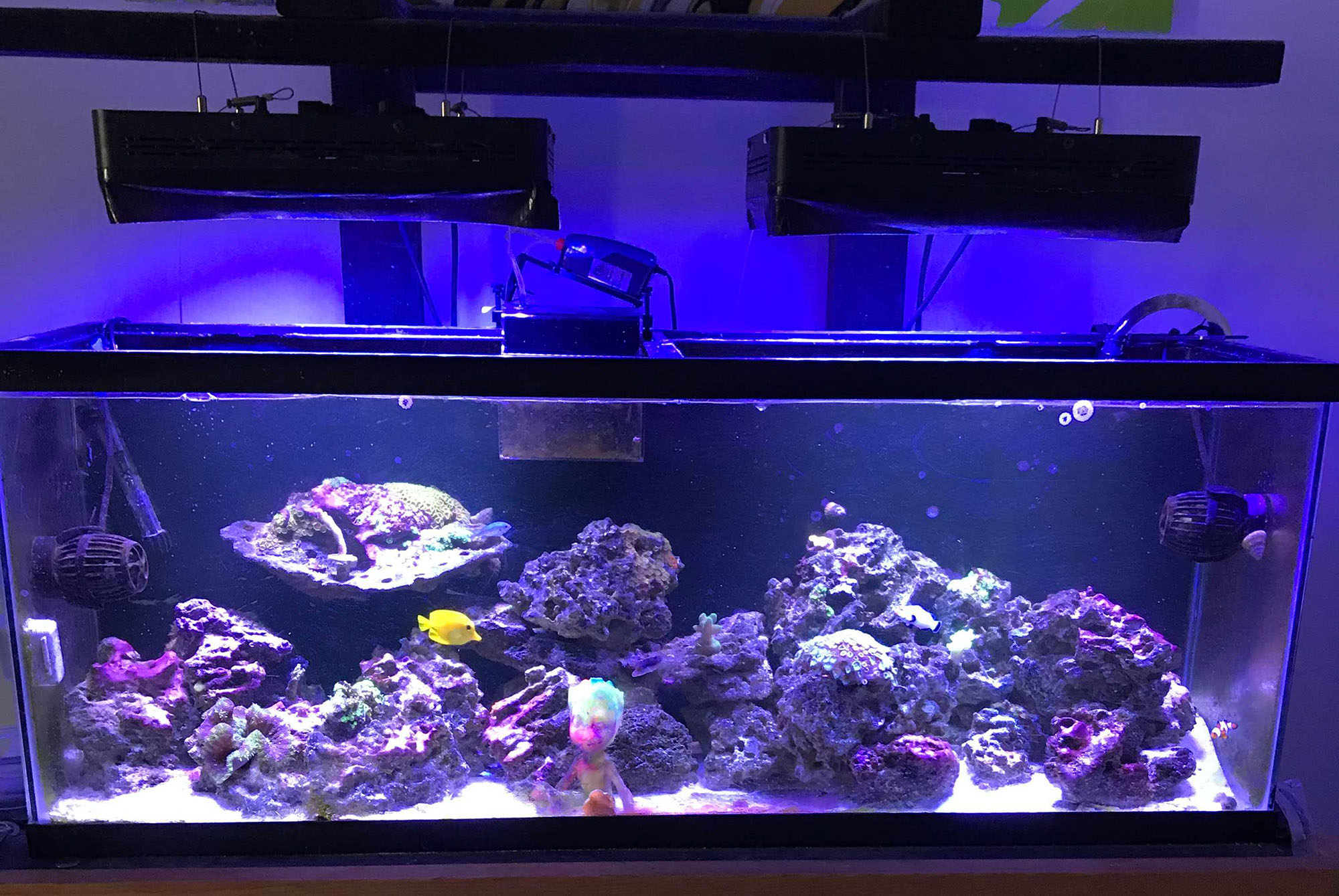 The Life Aquatic with Michael Weber

Outside of work at Sunset Hill Stoneware, Mike is also an aquarist. Recently, he set up a large saltwater tank  filled with community fish.

Many of the fish Michael keeps in his saltwater tank look like they came straight off the set of Finding Nemo. A few of the fish he keeps include a clownfish, yellow tang and a few other species commonly found in tropical waters like the Hawaiian islands or northern Australia.

Keeping an aquarium isn’t as simple as dumping fish in and watching them swim. It involves choosing fish that pair well together so the entire aquarium can thrive. You also have to make sure the tank isn’t too crowded for the fish living in it.

“I have a pretty big stock for a 55-gallon, but they all get along with each other,” Michael explained. “I don’t like aggressive fish, because you can only get a couple.”

Michael’s efforts as an aquarist only further prove that he cares about details. Both his attention to detail and his desire to better himself have made him one of our most valuable assets. Without him and the rest of the Sunset Hill Stoneware crew, we would never be able to deliver your pottery as fast as we do.