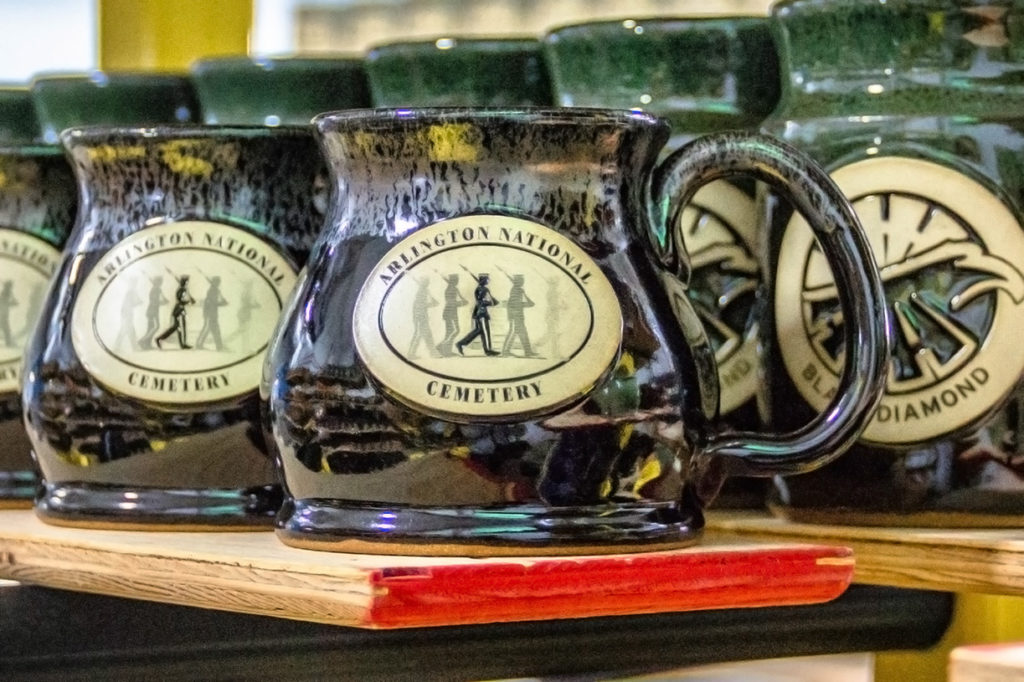 The land across the Potomac from the capital started out in the hands of one George Washington Parke Custis. He was Martha Washington’s grandson and the adopted son of first president George Washington. Custis built a mansion on the land he’d acquired using slave labor, finally finishing it after nearly 16 years due to disruptions from the War of 1812.

For decades, Custis used Arlington House as a way to entertain guests and as a shrine to his adoptive father. He even displayed relics from Mt. Vernon. After his death in 1857 though, the mansion and estate passed to his daughter, Mary Anna. This inheritance let Mary Anna live in the mansion and run the estate, but she was forbidden from selling it. Mary Anna married at the home and continued running the plantation with her husband and seven children.

Her husband was Robert E. Lee, who would later command the Confederate States Army in the Civil War.

Arlington During the Civil War

When Virginia seceded from the United States and war broke out, Mary Anna Custis Lee held off on leaving Arlington House until mid-May 1861. By the time she fled for safety, union soldiers took over the plantation, camping on its grounds and strolling past the mansion’s columns before they eventually departed for battlefields across the continent. 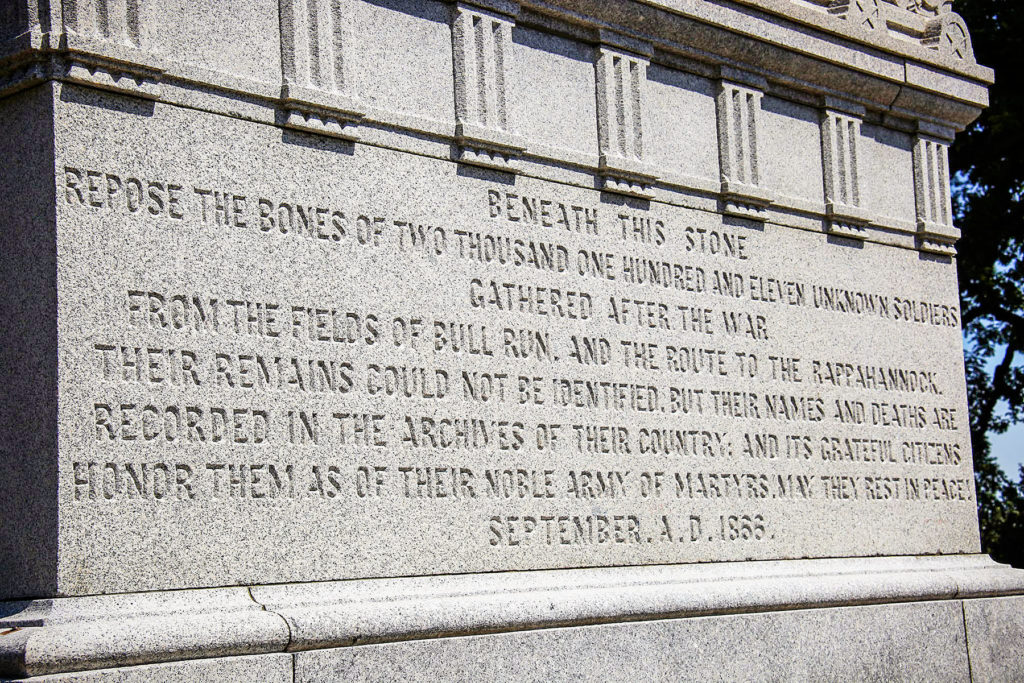 In terms of war strategy, taking early control of Arlington was a no-brainer. The estate sat on a hill 200 feet above the rest of Washington, D.C. on the other side of the river—with the White House in visible shelling distance, should the Confederates have gotten to the estate first. However, it was also a symbolic move, given its infamous owners.

Although union soldiers didn’t encamp at the estate again during the war, the federal government did take ownership of the land after Mrs. Lee failed to pay her taxes in person. During the second half of the war, the government declared Arlington a national cemetery. It was a choice they made out of necessity, as the Civil War was longer and bloodier than anyone had expected, putting other military cemeteries in the area at full capacity.

Like all national cemeteries at the time, segregation was in place at Arlington. Section 13, in the western part of the cemetery, holds most of the white soldiers from the Civil War. However, black soldiers and freed African Americans are buried in section 27. This is notable because section 27 is closer to the Potomac and was in a marshy area at the time. This put their graves at risk of displacement during floods. Needless to say, these weren’t ideal burial conditions for the men who fought and died for their freedom, for a country that wrongly treated them as lesser. Even still, the government practiced segregated burials there until 1948, when Harry Truman issued an executive order 83 years later.

From After the War to Today

Arlington National Cemetery grew a few times since the end of the war. It was somewhat of a pauper’s cemetery early on, serving as a burial site for union soldiers whose bodies couldn’t be brought home. But, as Union officers requested burials there, it became more renowned and tripled in size. Arlington House also still stands, its furniture and many of its paintings still on display with facts about Lee’s family, the stately building’s odd history and the blight on America that was slavery.

Today, more than 400,000 dead from America’s wars, military veterans and other national heroes now rest at Arlington National Cemetery. Some men who died in America’s earlier wars were even exhumed and reburied there. However, the qualifications for interment in the cemetery are quite strict. To be eligible for burial there, servicemen or their families must meet one of the following criteria:

Thousands of graves like these now dot the hillsides at Arlington, with even more interred in the walls of columbaria in the cemetery. However, there are some graves that stand out more than others.

Just downhill from Arlington House is John F. Kennedy’s grave. Since his assassination in 1961, Kennedy’s grave has borne an eternal flame. The only other president interred at Arlington National Cemetery is William Howard Taft.

One of the cemetery’s most famous features is the Tomb of the Unknown Soldier. This tomb houses the remains of soldiers from both world wars and the Korean War, plus a now-empty crypt from the Vietnam War. Servicemen have guarded the Tomb of the Unknown Soldier perpetually since 1937, no matter the conditions. The changing of the guard is a popular attraction for visitors, occurring every 30 minutes during the summer months. 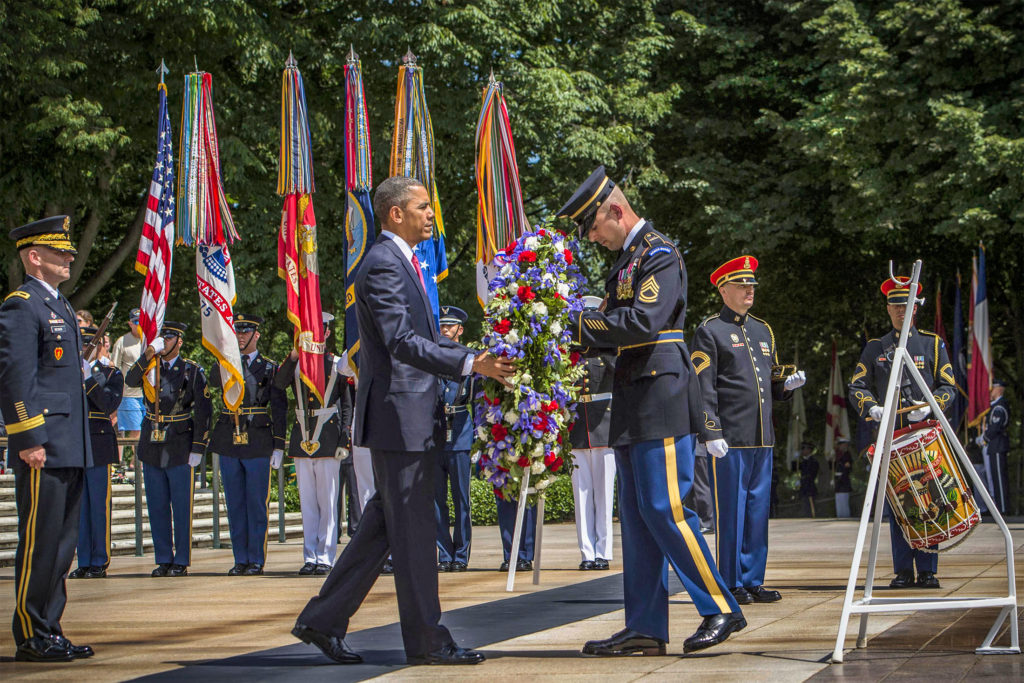 The earliest celebrations of Memorial Day at Arlington National Cemetery were pretty informal. One of the first, back in 1868, took place when the holiday was still called Decoration Day. Since then, there are dozens of ceremonies at Arlington to honor the men and women who fought and died for our country. One of these includes a full-honor wreath ceremony at the Tomb of the Unknown Soldier, over which the sitting president often presides. The very first occurred in 1929 with Herbert Hoover.

Every year, the 3rd U.S. Infantry Regiment—which also guards the Tomb of the Unknown Soldier—places flags on hundreds of thousands of graves at Arlington. There are also wreath laying ceremonies that day. Countless families also come to the cemetery to pay respects to their fallen loved ones and reflect

During normal years, the Memorial Day ceremony draws huge crowds to the cemetery’s amphitheater. Things in 2020 are a little different though, due to the COVID-19 pandemic. Those with family passes can still get into the cemetery, provided that they wear face masks. They may also only visit their relatives’ graves.

Arlington National Cemetery’s history has taken it from a private plantation owned by one of the union’s most infamous enemies to a symbol of reverence. Whether you’re on active duty, a veteran or a civilian, we recommend anyone visit when they’re able to tour Washington, D.C. and surrounding areas, and learn about this national landmark and its place in our country’s history.