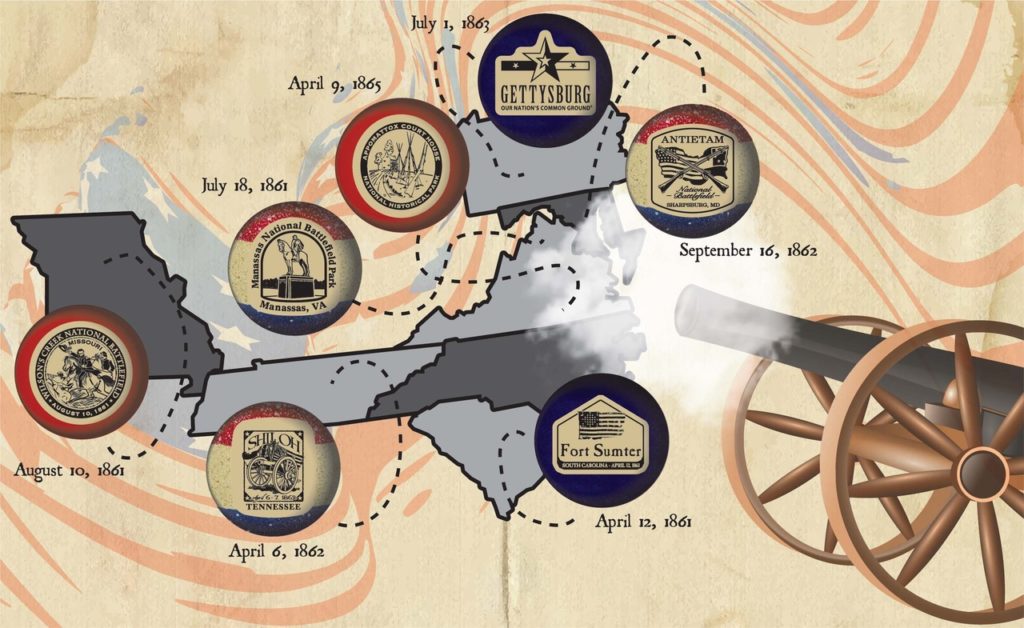 Although the U.S. had a few other conflicts between the Revolutionary War and the Civil War, the latter is one of the deadliest conflicts in our country’s history.

Some might argue that the Civil War began over states’ rights and federal law. However, at the core of that issue was that some states thought it should be legal to keep humans as slaves. When Illinois politician Abraham Lincoln became president after including abolition as part of his campaign, southern states left the union to form the Confederate States of America. Thus, we began a four-year war to redefine what freedom means.

There are dozens of Civil War-era battlefields across the southern and eastern parts of our country, many of which are on our Mug Map. While it’d be difficult for us to show every single Civil War site where you can find Sunset Hill Stoneware coffee mugs and other collectibles, we’ve included a few of the highlights from across the country. 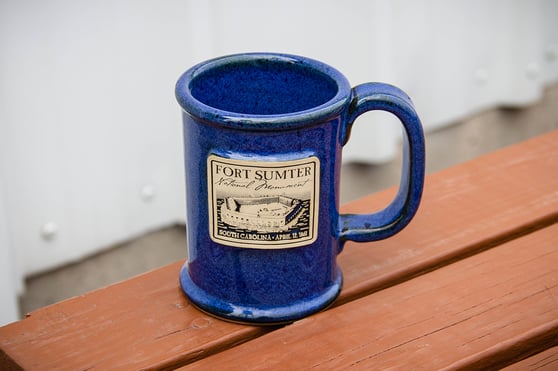 On the water in the Charleston Harbor in South Carolina, Fort Sumter is the site of the first battle of the U.S. Civil War. In April 1861, hundreds of Confederate soldiers bombed the Union fort, forcing it to surrender the next day.

Although there were no deaths, this battle brought America into a state of civil war. Without the fort in Union hands, it would be harder to end the rebellion as it broke the Union’s naval defenses.

To visit Fort Sumter National Monument today, take a ferry from the visitor center at Freedom Lane and Liberty Way. From there, tour the famous fort in person and explore the island as it looked during the height of the Civil War. You also might find guides to show you more about life in the fort or even recreate the battle itself.

Those who want to bring Fort Sumter home with them can visit the monument’s bookstore. There, you might not only find books and movies about the start of the war, but also Civil War collectibles like stoneware mugs unique to the fort to bring home with you. Some of the designs you’ll find on these custom pottery mugs feature the distressed Union flag found at the fort, or even Fort Sumter itself in multiple color options. 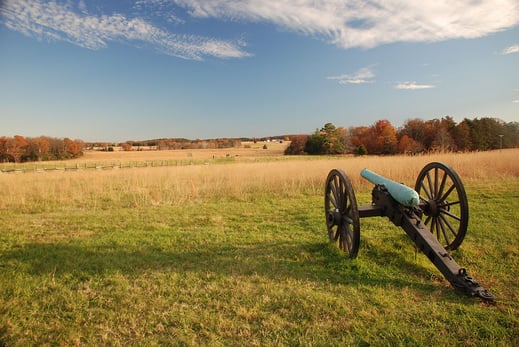 Depending on where you’re from, this battle has two different names; Bull Run or Manassas. The Union and Confederacy fought at this site outside of Washington, D.C. twice—both battles were Confederate victories.

In the first battle, both sides were unprepared. Union forces arrived too late, which gave the Confederates time to bring in backup by train. Their victory was a wake-up call for both sides, as they realized this war was going to be longer than anyone hoped.

The next year, the two sides clashed again in the same spot, with the same results on a larger scale. It was here again that Union mismanagement allowed the Confederates to take an important victory and plan further invasions.

This now-quiet battlefield is on the outskirts of Washington, D.C.’s suburban sprawl. Visitors can find monuments and exhibits in the peaceful fields to learn more about what led up to that historic battle, the aftermath and what life was like for the soldiers in their own words.

You might also find stoneware coffee mugs available for purchase in the bookstore at the Henry Hill Visitor Center, including the Executive Slim in Brick Red and the Wide Mouth mug in Royale Frost. Both of these stone coffee mugs show details unique to the battle at Bull Run and support the battlefield’s preservation. 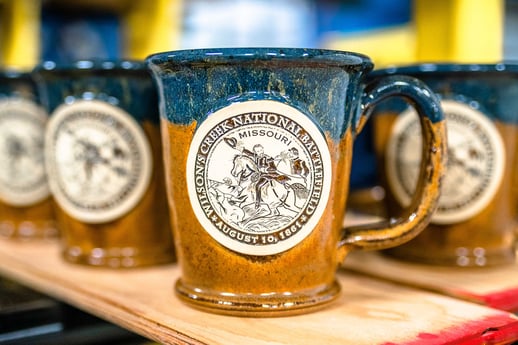 Located in Republic, Missouri, the Battle of Wilson’s Creek was the first major battle of the war west of the Mississippi River.

Although this wasn’t the most decisive battle of the Civil War, it forced the Union to pay attention to “border” states like Missouri. It also brought the war westward, expanding it into a large-scale conflict.

Today, Wilson’s Creek National Battlefield is almost in its original state from 1861. Homes and farms in the area at the time of the battle still stand in excellent shape. Living history programs can also show visitors how the soldiers and civilians from this pastoral part of Missouri lived and passed the time.

There are also some unique gifts at the battlefield’s bookstore. Some of the finds include lapel pins with the Confederate seal, atlases of the war’s major sites, and some unique mugs. On the front medallion, you’ll find an image of the battle, complete with Union forces on horseback charging over the fields. There’s also a hidden fact on the bottom of each mug you’ll only find at Wilson’s Creek National Battlefield. 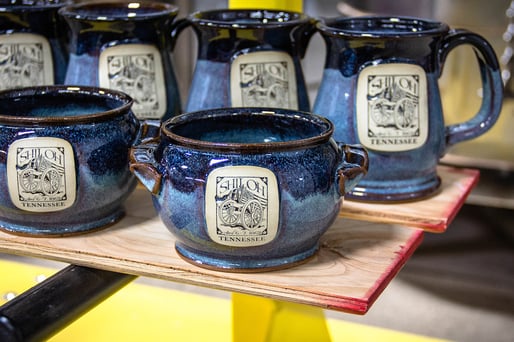 The backwoods of southwest Tennessee were the stage for one of the bloodiest battles in the course of the war, the Battle of Shiloh. In April 1862, the battle began when Confederate attacked Gen. Ulysses S. Grant’s forces in the area. However, by the time the battle had ended, Grant brought in backup and fought back.

Because the battlefield is in such a rural area and has historical importance, Shiloh was one of the first Civil War sites after the conflict ended. Today, visitors can take car tours through the park, and with park rangers and living history groups throughout the year.

Even with all of the preservation efforts, Shiloh National Military Park’s maintenance comes from buying gifts from the park at its two bookstores. You can find some unusual pieces like stoneware crocks and mugs in colors like Night Sky and Spanish Moss, all of which have symbols of this historic battle in detail on the front medallion. 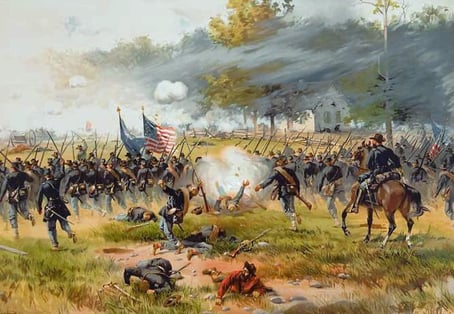 Despite the peaceful setting near a creek in the rolling fields north of Sharpsburg, Md., this was the site of the single bloodiest day in our military history. In the Battle of Antietam, the Union Army met General Lee’s forces at dawn to capture an area close to Washington, D.C. By sunset, almost 23,000 soldiers died.

In the wake of this horrific battle with a Union victory, President Lincoln gave the Emancipation Proclamation. With this, he freed every slave in the country, turning the page on one of the darkest chapters of America’s history.

Today, anyone wanting to see where the war changed can go to Antietam National Battlefield. Many of the buildings and weapons seen during the war are still there, along with trails where anyone who visits can follow the course of this bloody battle up close.

To protect this battlefield, the visitor center has Civil War collectibles like stoneware mugs, pins, patches and more. These pieces feature the Union and Confederate flags with two crossing rifles, making for a great part of your mug and stein collection.

One of the most famous battles of the Civil War took place on Union soil in southern Pennsylvania. Thousands of troops came to Gettysburg as General Lee tried to invade the north. Over the course of three days in July, thousands of soldiers died in the Battle of Gettysburg before the Union stopped Lee’s march northward. 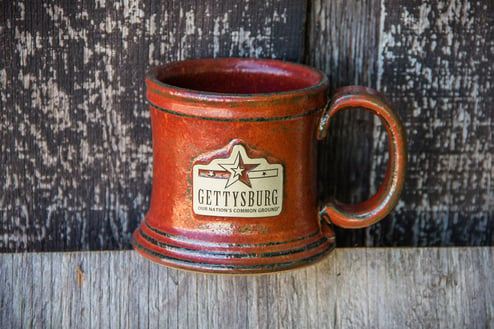 The carnage was horrible. A nurse at work after the battle described the smell over town as, “a malignant force, capable of killing the wounded men amid the corpses until the medical corps could reach them.” It would stay that way for weeks, maybe even after President Lincoln gave his Gettysburg Address at the site months later.

Historians call this the turning point of the war. General Lee fled to Virginia. From here, Union generals attacked and waged campaigns through the South, cutting the Confederacy off from supplies.

Today, Gettysburg’s importance can be seen in every corner of the city. Gettysburg National Military Park surrounds the city limits and is full of places to explore, with miles of trails and guides to help you along the way.

At the Gettysburg National Military Park Museum, you’ll find artifacts from the battle and plenty of history lessons, plus memorials for units from many states. While there, you might find the Potbelly or Tom’s Mug in Sunfire Red with patriotic stars. It’s a design that is right at home with your morning cup of coffee.

It was a long few years while Union forces fought to control the South. Commanders marched through Georgia, Tennessee and Mississippi, destroying everything in their paths. The war ended when the Confederates left Richmond, Virginia, only for Union forces to cut them off before they could get any further west. 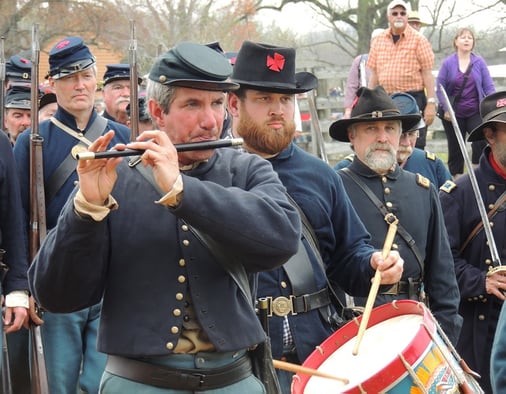 The house in which General Lee surrendered tells an odd story. Its owner was Wilmer McLean, a grocer from Manassas Junction, Va. But, after the First Battle of Bull Run sent a cannonball through McLean’s fireplace, he and his family moved to the community of Appomattox Court House.

In the worse case of luck in American history, the war came back to McLean’s house when soldiers knocked on his door and asked to use his home for the surrender. McLean agreed, and his story is an odd piece in a war that changed freedom.

At Appomattox Court House National Historical Park, visitors can see McLean’s home and view the space that changed the meaning of America’s title as the Land of the Free.

As you follow the trail of the Civil War, this might be one of your last stops—celebrate your trip with a gift from the park’s bookstore. Some are statues of Generals Grant and Lee, along with a stoneware mug in Brilliant Blue or Brick Red, showing the last moments of the war.

The Civil War was a turning point in American history. Although it did not fix every issue the U.S. faced with equality, this war marked a point when we began to see all men and women as equals. Supporting these battlefields and parks through their collectibles helps to ensure that these lessons can be taught for generations to come.