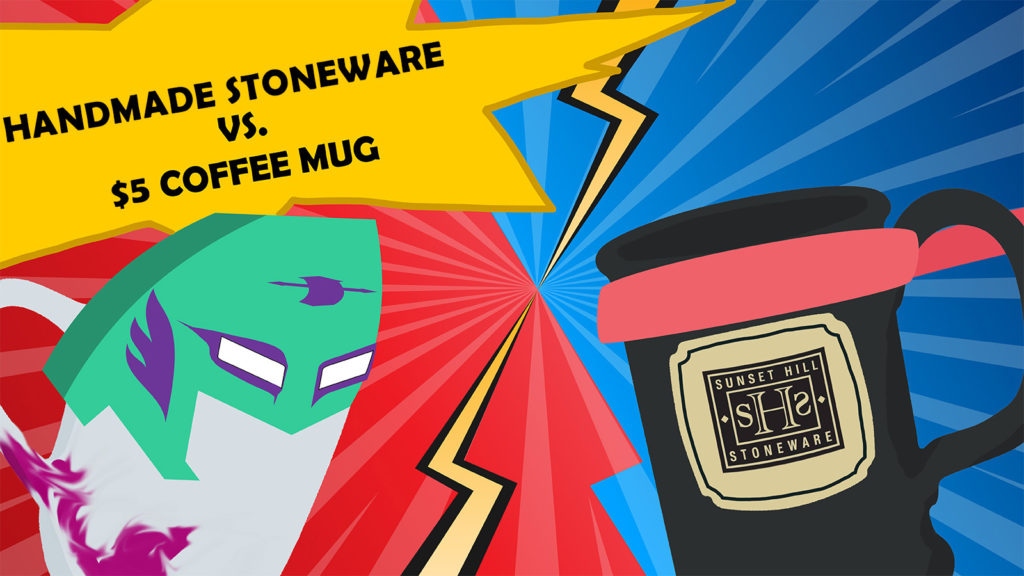 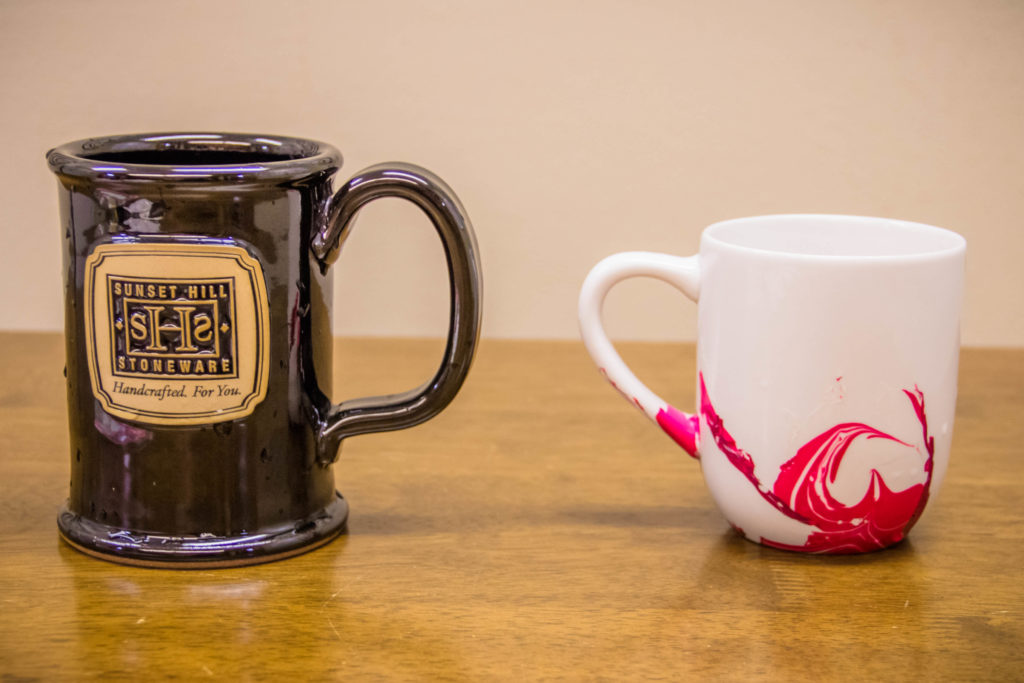 Every once in a while, we receive comments online from people who have never seen our product, questioning why we would charge so much for a mug. After all, many of them might argue, what makes a handmade stoneware mug different from a printed stoneware mug you’d find at a big box store? You can find the latter for less than $5 sometimes. As it would turn out, there are a lot of differences between the two that settle which coffee mug is best. Science can prove it.

This week, we embarked on an experiment to see what differences the quality of our product makes. Since we know we’re biased in this experiment, the author of this post has coined the tests, Questionable Mug Science. However, the results don’t lie.

The Mugs We Used for the Experiment

To conduct this experiment, we chose two stoneware mugs with very different makes and price points. Our control group is a typical mug that you’d find at any retail store. It had a printed design on it at one point, but that has since faded and chipped away after years of use. The label on the bottom has its origins in Taiwan. It’s also labeled as stoneware, and dishwasher and microwave safe. While we don’t know what this mug’s retail price was, it’s safe to say it wasn’t more than $5 new.

The experimental group for this test is one of our own stoneware mugs. The Straight Shot is a handmade stoneware mug that has a medallion with the Sunset Hill Stoneware logo on it. Although it was dusty after years of our potters touching it with clay all over their hands when they were learning how to make the style, it was like new after we washed it in the sink. On the bottom, there is a stamp labeling the mug as handcrafted in the USA, along with our logo. Like the control mug, our Straight Shot mug is safe to use in the microwave and the dishwasher. It is also heavier than the control group mug.

The Tests We Conducted

We did a series of tests on both mugs. These include tests for their performance in the microwave, in the dishwasher, how they react to heat exposure and more. Some of these, as marked below, employed the use of a temperature gun so we could see how hot they were without burning ourselves. Here is the full list of tests we ran for this experiment:

For this test, we took a base temperature of both mugs and filled them to the top with water from the same faucet. Then, we microwaved them separately for 3 minutes and 30 seconds. Once we pulled them out, we used the temperature gun on the front and the handles of each mug. We also took their temperatures after two minutes passed to see how they retained heat.

Making brownies, omelets and other treats in a mug has been all the rage for the last several years for anyone wanting a quick snack. To see how the mugs distributed heat, we made single-serve instant brownies in both, following the package instructions. We then did a taste test to see how the brownies cooked in each mug. 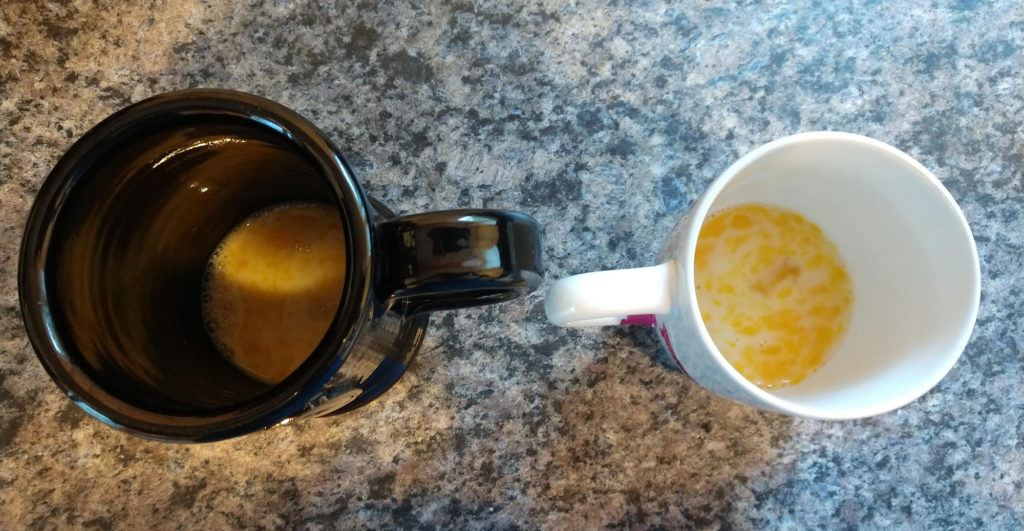 We saved this one for last because we didn’t know what would happen to our control group mug. For this experiment, we preheated a conventional oven to 350° F and put both mugs on the top rack. Both of them contained the ingredients for scrambled eggs, just so we wouldn’t be putting them in the oven empty. Then, we baked them side by side for five minutes.

The Results of Our Experiments

After our litany of tests, it was easy to see who the clear winner was in terms of quality in our opinion. However, a few of the results were pretty surprising. Read on for the outcome of each experiment: 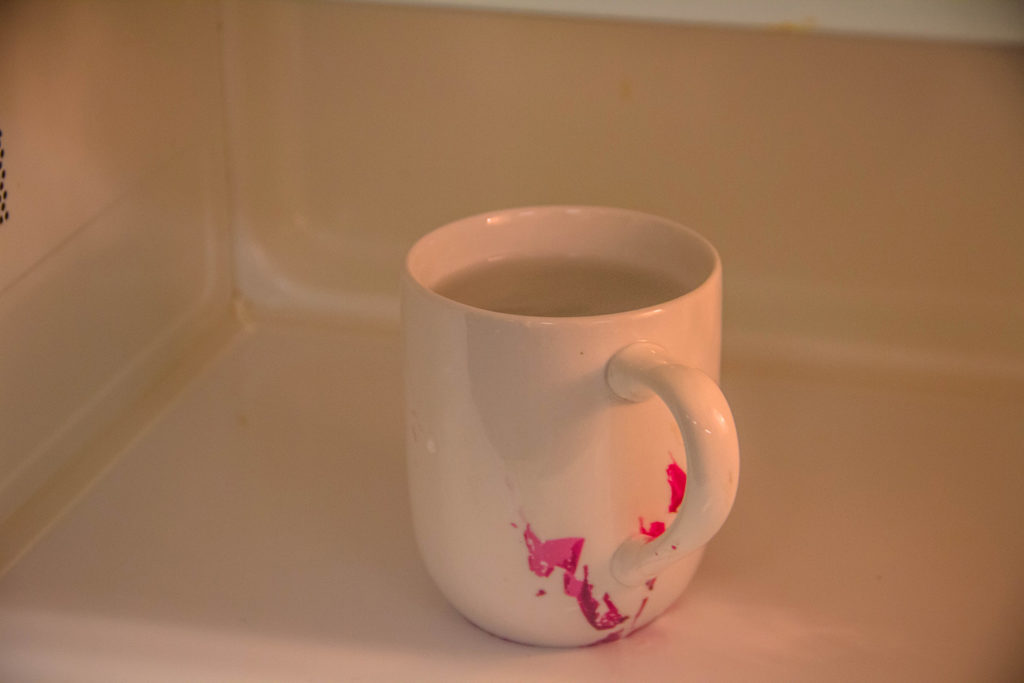 Admittedly, we didn’t have high hopes for the control group mug in this test. A lot of people have burned their hands microwaving cheap coffee mugs over the years. Plus, there are plenty of urban legends in which water heated in a mug in the microwave exploded, scalding whoever was unlucky enough to get too close.

The water in the control group mug reached a rolling boil during the last 30 seconds in the microwave. However, once we took it out, its handle registered at 132° F. The outer wall of the mug, on the other hand, was dangerously hot: It was 196° F.

The water in the Straight Shot never quite got to the boiling point, but there were bubbles forming on the inside walls, and it was steaming. However, it was also easier to take the mug out after it was done microwaving. That might have something to do with how the handles on our stoneware retain heat. When we used the temperature gun on the experimental group mug’s handle, it registered at about 80° F, while the outer wall was at 173° F. While the walls were still too hot to touch, the handle on the Straight Shot was easy to grab without any second-degree burns. 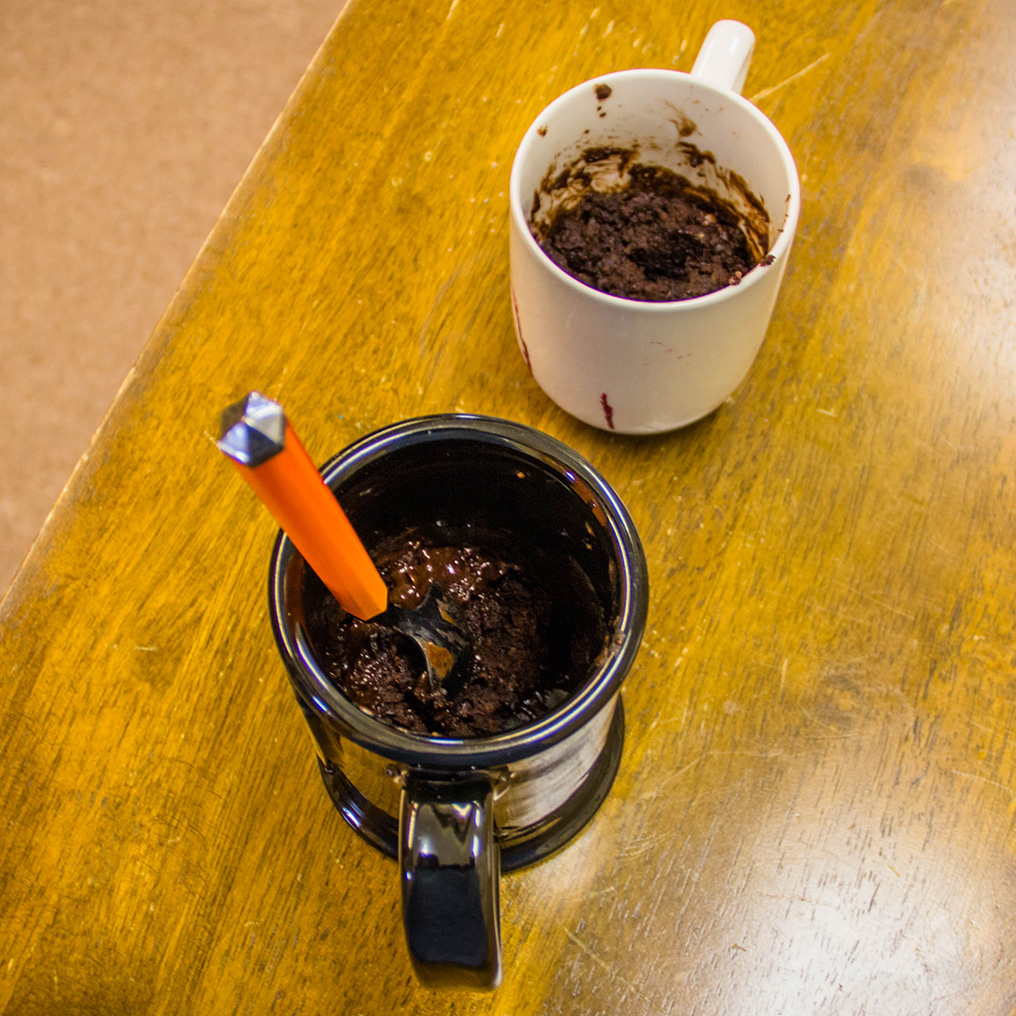 We didn’t know what to expect from our microwave brownie test. After all, as long as you follow the cooking instructions, you’d think that a brownie would turn out the same no matter what you use. The real difference came during the eating experience.

As it turns out, the brownies in both mugs came out pretty similar. Both had some uncooked batter at the very top of the brownie and in the corners at the bottom. However, where the Straight Shot really stood out was after the brownies cooled for a few minutes.

By that point, the brownie in the control group mug was closer to room temperature. The Straight Shot’s brownie was still warm after the same amount of time. Needless to say, if you’re looking to make a brownie, a cake or any other afternoon snack in a mug, our stoneware is the way to go. 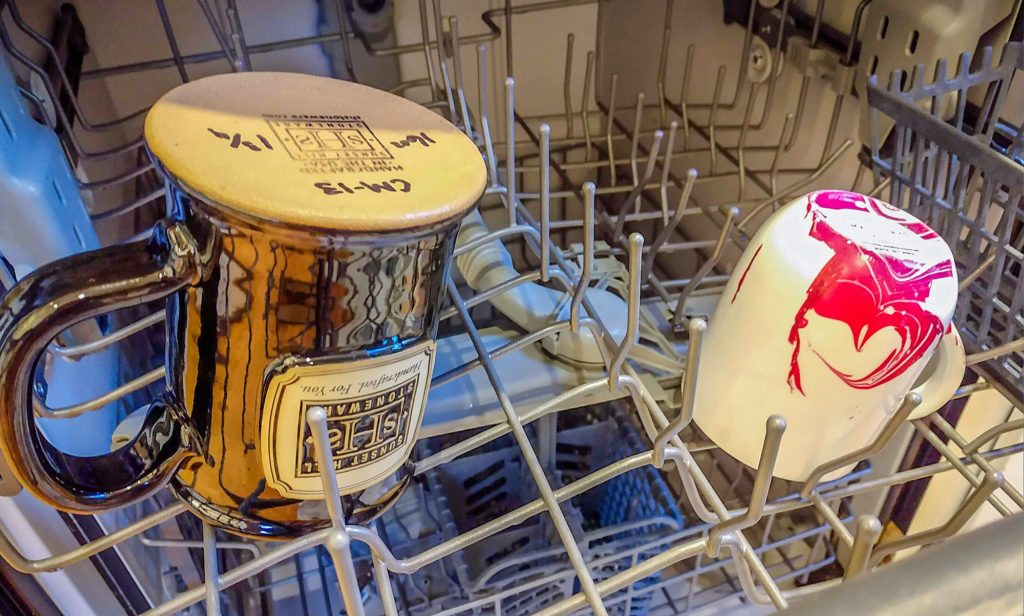 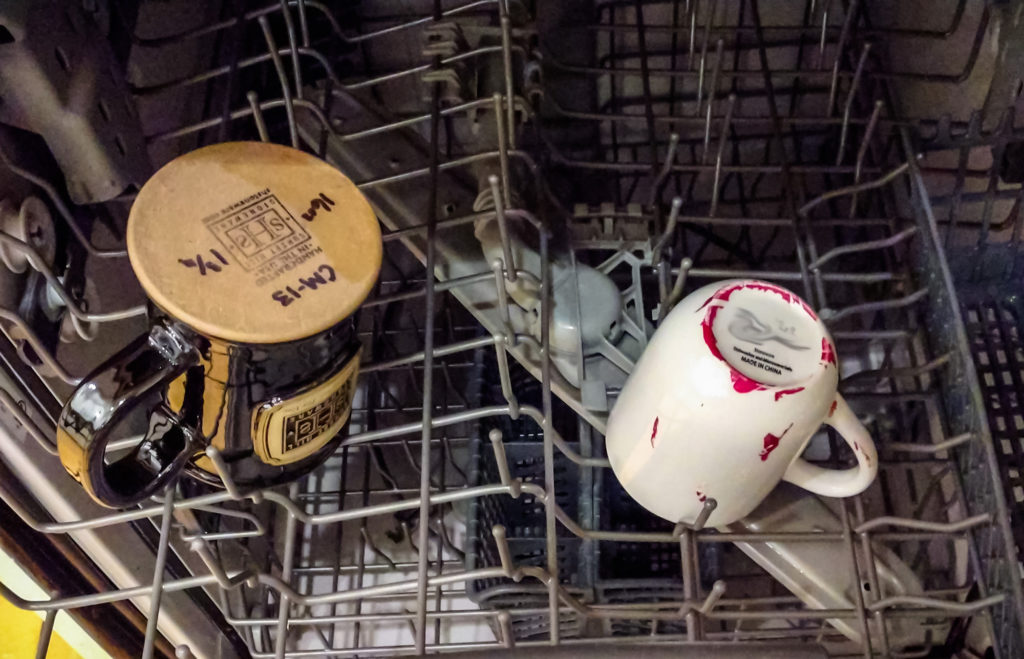 One of the questions we get most often about our mugs is whether or not they’re dishwasher safe. While we already knew the answer, it was intriguing to see the other mug after it came out.

What was left of the design on the control group mug before we put it in the dishwasher was gone after we pulled it out. In fact, it didn’t even survive a whole wash cycle–we pulled it out after 40 minutes because we were worried it wouldn’t survive at all. Now, the old design is a few traces of pink on an otherwise plain white mug. For the record, this mug also had a label declaring it as dishwasher safe.

Since it has no printed artwork, we had nothing to worry about with the Straight Shot mug. Like all of our products, the mug lived up to its dishwasher-safe design.

We were a little nervous to conduct this test, but luckily both mugs survived unscathed. Five minutes isn’t much time for scrambled eggs to bake in just about any scenario, but there were solids forming in both of the mugs by the time we pulled them out in the oven. Things got more interesting after we pulled out the thermometer gun.

The control group mug was warmer near the top than it was on the bottom. This is particularly strange when you consider that the oven we used has heating elements above and below the rack. Most ovens do. We still aren’t sure why that happened, but we have a few guesses. Most of them center around the fact that the eggs we used were in the refrigerator.

However, that theory doesn’t explain how the Straight Shot did. It had an even heat distribution all over the mug. So, while you might need more than five minutes to cook anything in a mug in the oven, we at least know the stoneware mug can distribute the heat evenly.

The control group mug held its own during our tests, mostly. However, the Straight Shot performed better overall. It held and distributed heat more evenly, stayed warmer longer no matter which test we ran and survived half of a dishwasher cycle with ease.

Sure, an imported, mass-produced mug might have a cheaper price tag. But, quality is the name of the game when you’re looking for something to hold your coffee in the morning, and you won’t have to replace it as quickly as a cheaply made coffee mug. Next time you’re looking to buy a new mug, whether it’s for yourself or as a customized gift for your friends or coworkers, make sure your decision is set in stone.