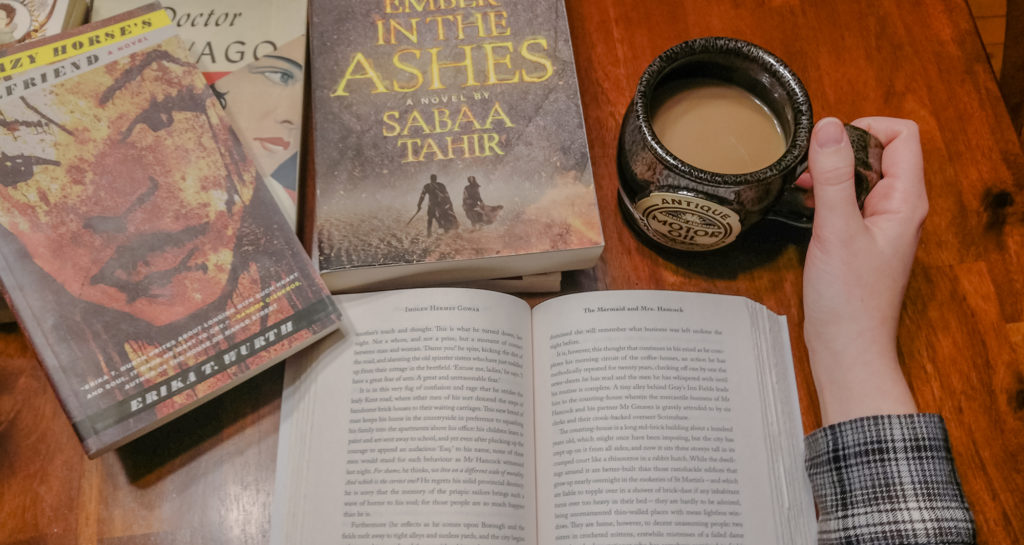 The Sunset Hill Stoneware pottery crew can have headphones in while they work. For many of our team members, it helps to have that layer of background noise as they’re making mugs or helping you choose the best stoneware mug style and glaze color for you. While some of our team members listen to podcasts or music while they’re making your quality stoneware, several listen to audio books and read at work.

These are just a few of the books our potters are reading, including reviews from each of them. 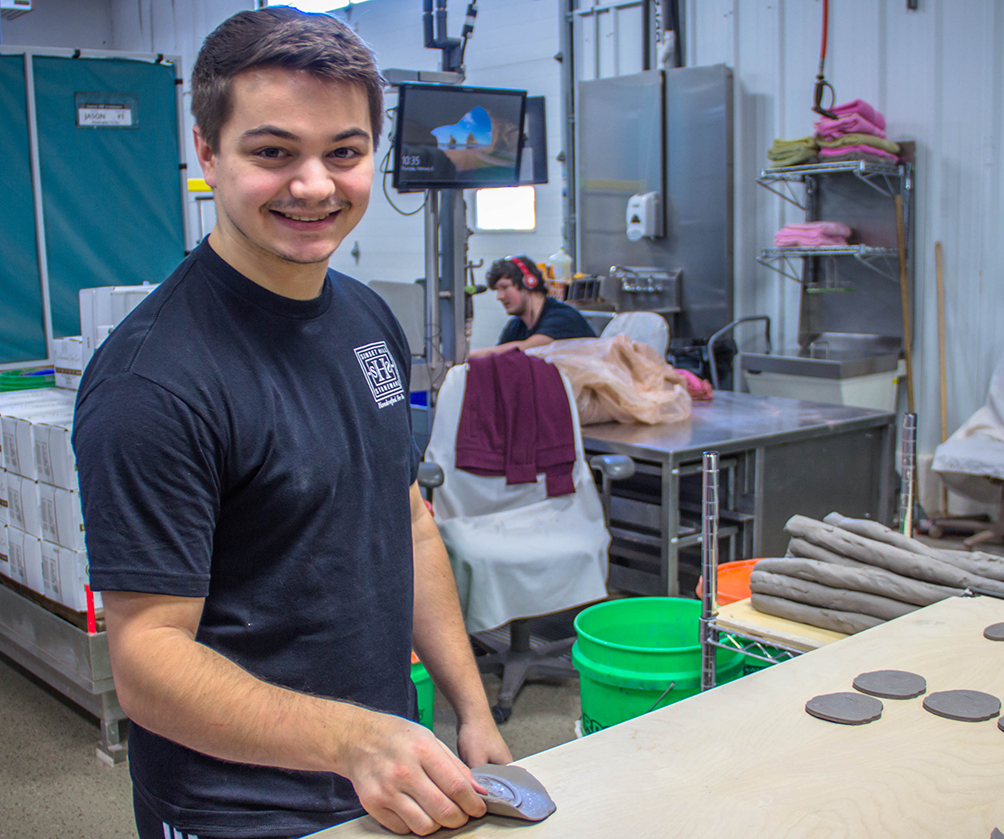 A key player in making your custom medallions, Chris listens to a lot of fantasy books while he works. He particularly enjoys long fantasy series. When we caught up with him, he was finishing up the First Law trilogy, a fantasy series by British author Joe Abercrombie. Chris was about to finish Last Argument of Kings, the final book in the series.

This fantasy trilogy follows multiple characters in a world pitched in war, including a wizard, a barbarian, a nobelman and more. With multiple novellas to support the main three books of the series, the First Law trilogy follows an epic story almost any fan of fantasy stories will know and love, complete with the horrible monsters and political intrigue that made series like Game of Thrones famous. Like most fantasy series, these books are also upwards of 500 each. In turn, the audio books Chris listens to while he works are more than 20 hours long in some cases.

“It’s a good time filler,” Chris said. “It takes me less than a week to finish a book this long, just because I’m here for eight or nine hours, but I’m not listening continuously.”

When he’s cutting out your medallions, Chris estimates that he listens to audio books for about six hours each day.

“I’ve always been a big reader, ever since I was a kid,” Chris explained. “I only started listening to Audible and podcasts since I started working here.”

Chris rates Last Argument of Kings as four stars out of five. Just like many of our mugs, all of the books in this fantasy trilogy are available on Amazon.

“It’s really well-written,” Chris said. “It’s not a masterpiece of original work, but it’s pretty close. It has good characters.” 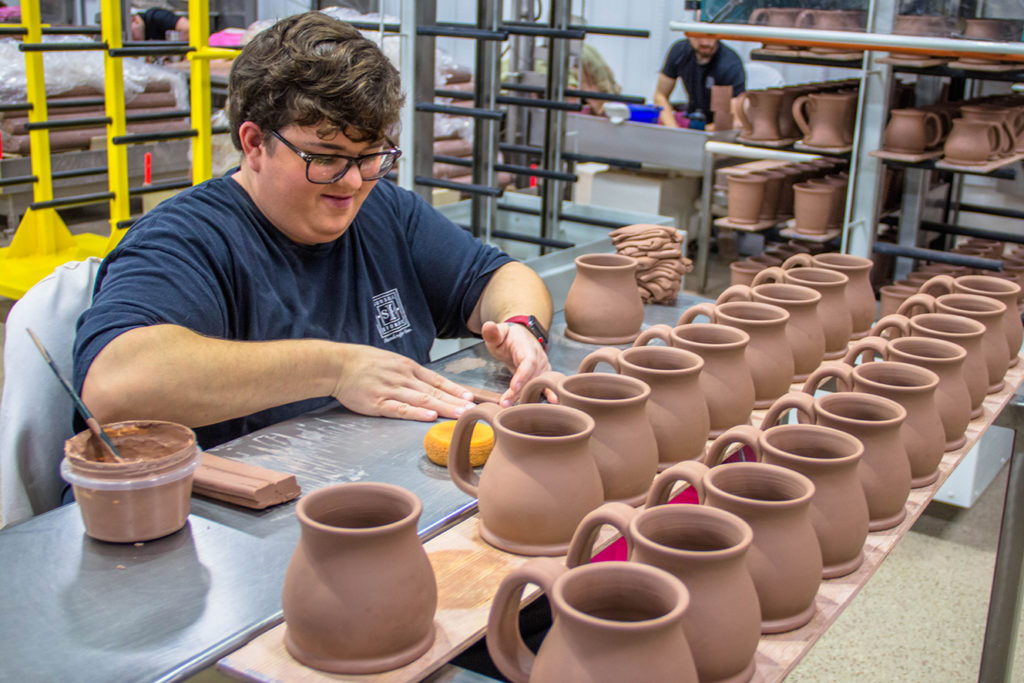 If you look closely at the base of your mug’s handle, you might notice a thumbprint. This thumbprint might belong to Marcy, who applies handles and medallions to your stoneware mugs. While she’s working, Marcy likes to listen to memoirs.

One of the most recent memoirs she’s been listening to is Furiously Happy by Jenny Lawson. The memoir chronicles Lawson’s life as she deals with traumatic experiences and her battles with mental illnesses like severe depression and anxiety, among others. However, she laces humor throughout the narrative for a hilarious read that makes it a departure from most memoirs. Marcy enjoyed this book enough to give it five stars out of five. She also related to the experience Lawson described.

“She makes mental illness not seem like the most daunting thing you’re going to experience,” Marcy explained. “That everyone has something that they’re going through, and there are people out there who care about you, no matter what.”

Soon, Marcy plans to read Let’s Pretend This Never Happened, another book Lawson wrote about her unusual life story. Although memoirs tend to address darker subject matter, she likes Lawson’s work because of her humor. For her, it was a change of pace.

“Sometimes, memoirs can be so sad. I feel like nobody ever writes a story about how amazing their life was,” Marcy said, laughing.

Marcy said that she had read 10 audio books since she began working at Sunset Hill Stoneware two years ago. It’s more than she used to be able to read before she started working here, because having an audio book running allows her to get other things done while she listens to the story.

Furiously Happy is available wherever books are sold, including on Amazon. 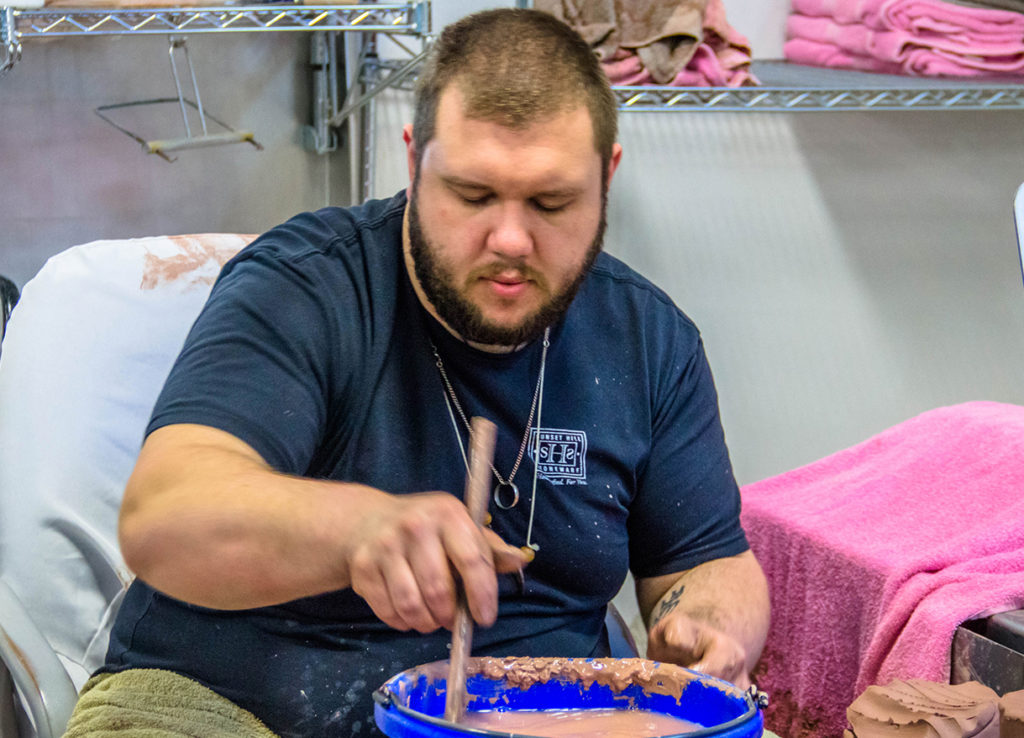 Dave is one of our potters who makes the body of your mugs and steins. Like Chris, Dave enjoys listening to fantasy novels while he works. However, two of the most recent books and series he’s read at work include Awaken Online by Travis Bagwell and Jurassic Park by Michael Crichton.

The Awaken Online series follows Jason, a high school student who uses a new virtual reality game to escape the troubles of reality and ultimately starts to become the game’s villain. The series includes five main books and several spin-off stories so far, so there’s been plenty for Dave to read while he works. Of the spin-offs he’s read from the series so far, Dave rates them five out of five and is looking to read more from the series.

The novel that inspired the blockbuster film franchise, Jurassic Park is a cautionary tale about chaos theory complete with dinosaurs. It follows a group of scientists as they witness the consequences of an amusement park filled with genetically revived dinosaurs. On top of being a fine example of why we don’t need to revive dinosaurs, the book is a bestseller.

Now that he’s finished both of these novels though, Dave said he’s looking to read The Andromeda Strain. This sci-fi thriller is one of the first novels Michael Crichton published and follows a team of scientists investigating an alien illness that wiped out everyone in a small Arizona town. Like Jurassic Park, it’s now regarded as a classic. 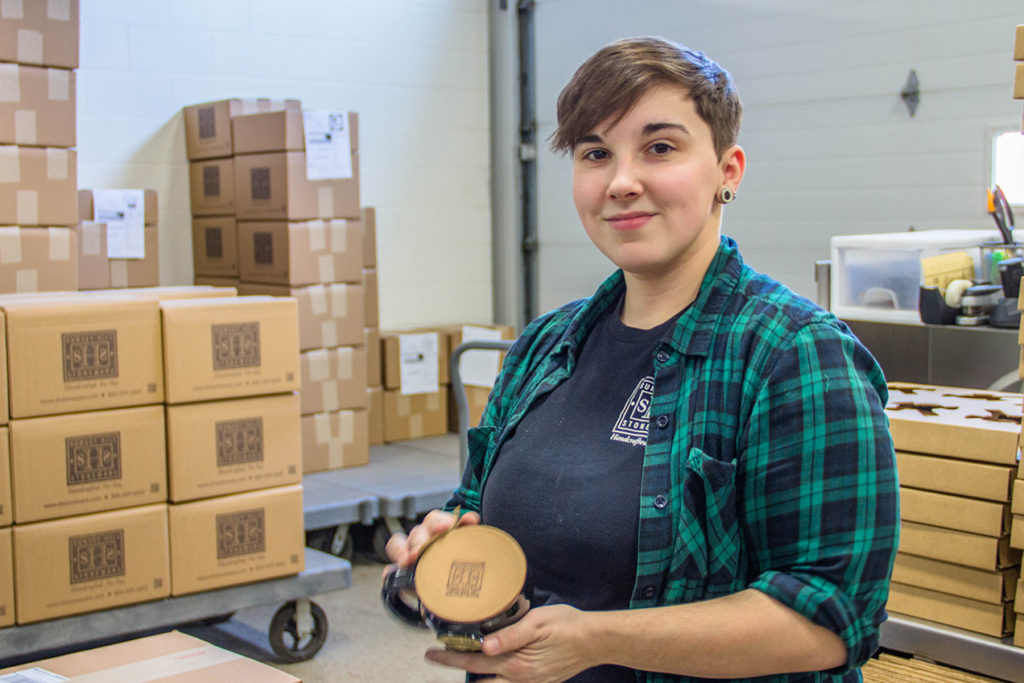 In our shipping department, Rachael inspects hundreds of mugs for quality control before we ship them across the country. As is the case with other members of our team, Rachael enjoys listening to fantasy novels while she works. She also enjoys sci-fi and historical fiction while she works.

Recently, Rachael has been listening to Eragon, part of the Inheritance Cycle series. Eragon follows the titular character after he comes upon a blue stone that turns out to be a dragon egg. Once the egg hatches, it seals Eragon’s fate and he embarks on an epic journey as a dragon rider. There are four books in the series, all of which have become classic young adult novels.

“I’ve listened to it before, but I thought it’d be worth giving it a reread now that I’m an adult,” Rachael explained. “And it totally was. I have a different perspective on the book.”

Now that she’s older, Rachael rates Eragon as a solid four out of five stars. However, it’ll be a few days before she can continue reading the rest of the series or pick up a new book, so she’s listening to music or podcasts in the meantime.

“I’m in between books,” Rachael explained. “I have to wait until I can get more Audible credits.”

Several of our team members share an Audible account, so they also share books. Since the work at some of our stations can be monotonous at times, this small book club allows our crew to read together while they concentrate on giving you some of the best stoneware pottery in America. You can learn more about what else our crew likes to do in our ongoing series of employee profiles below.