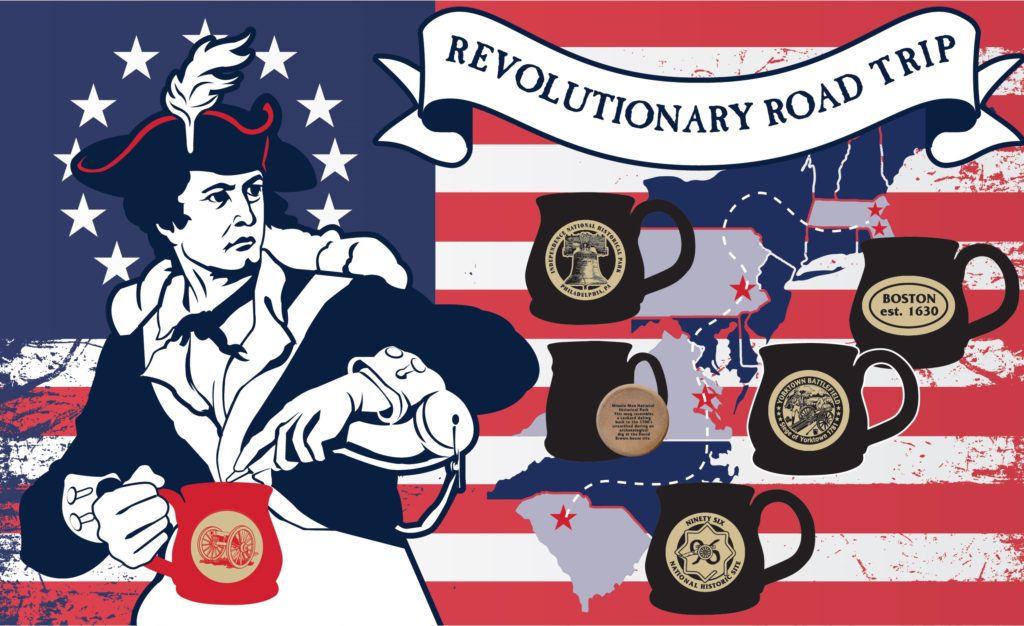 Raise a glass to freedom! The United States of America is celebrating its 242nd birthday this coming week, and Sunset Hill Stoneware is ready to join the party at plenty of colonial national parks with its mugs and steins as we have for years now.

The United States of America started out as 13 British colonies stretching across the east coast of the continent. The colonies existed for over 100 years before the Revolutionary War, but everything changed when the British levied universally disliked taxes against the colonists in order to pay for the French and Indian War. Threats to their civil liberties and system of self-government soon followed.

Here are five National Historical Parks where you can find pieces of America’s Revolutionary history, plus some handmade stoneware mugs to commemorate your visit.

Several major events leading to the Revolutionary War took place in Boston. It was here that, fed up with restrictions on their freedom and a series of new taxes, the colonists began expressing anger. The Boston Massacre, where the British opened fire on angry citizens, killing five in 1770. Three years later, residents hurled about 90,000 lbs of British tea into their harbor during the Boston Tea Party in response to new taxes on the leaves.

Most of the sites within the park coincide with the Freedom Trail, including the Paul Revere House, the Bunker Hill site, Old North Church, Old State House and more. All of these buildings marked important points in the earliest parts of the war. While most of the battles here weren’t the biggest or most decisive, they further escalated the conflict.

Visitors can see reenactments of the Boston Massacre, plus walk in the steps of Paul Revere’s famous midnight ride while thinking about how these actions led to the United States becoming its own nation. You can also pick up a Sunset Hill Stoneware mug in Sandstone or Sunfire Red with a medallion unique to the park and take a piece of your journey on the Freedom Trail home with you.

The shot heard around the world was fired near this spot in Concord, Massachusetts in 1776. The fighting began in Lexington, but here American militiamen—minutemen—defended the town of Concord. The small battle in Lexington forced the British infantrymen to move to Concord, where they faced another uprising from local militias.

In the end, the British underestimated the military strength of the colonists and retreated to Boston.

Today, the park’s landscape looks like it did during Colonial times, complete with restored homes. You can also follow the winding Battle Road Trail, a five-mile path through the woods and fields of Concord that follows the route of the fighting between the British and the minutemen. The trail passes the original battlefield and the Old North Bridge where the minutemen to fire back at the British. The redcoats also captured Paul Revere at this site at the end of his famous midnight ride.

Although Minute Man National Historical Park marks the beginning of a struggle for independence, the British retreated this time. This conflict was no longer about disorganized rebels causing chaos in Massachusetts. It was about a united group of people fighting to be an independent nation.

Sunset Hill Stoneware is at Minute Man National Historical Park’s North Bridge Visitor Center, near the Old North Bridge; or the Minute Man Visitor Center near the east entrance. The mugs at this park look like a tankard from the time of these first battles. With them, you’ll feel the first flash point in the Revolution with every cup of coffee or beer. 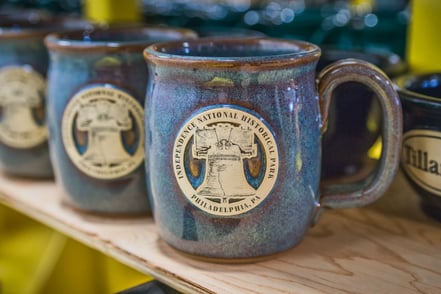 A staggering amount of important turning points in America’s early history took place within this single square mile of Philadelphia.

Independence Hall, a UNESCO World Heritage Site, is where the Declaration of Independence was adopted in 1776 and the U.S. Constitution was ratified in 1788. Also found within the park are City Tavern, a meeting place for America’s founders, and the Liberty Bell Center. Here, the cracked bell stands on display for visitors from all over the world.

While the Declaration of Independence itself is located in the U.S. Capitol, visitors can see the President’s House, the First and Second Banks of the United States and more. Every corner of these six city blocks is bursting with America’s history.

Visitors to the site may also find Sunset Hill Stoneware’s Java Taster with the Liberty Bell in our Stormy Blue glaze. Freedom rings in this mug, even if the Liberty Bell no longer can. A host of other mug and stein styles are also available, including the Speakeasy and Dale Barrel in many glaze colors. 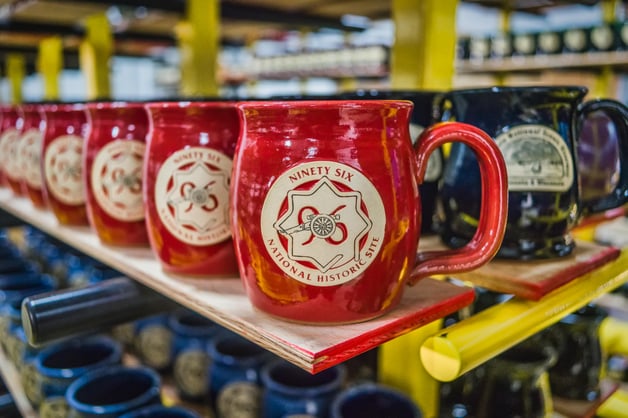 In the town of Ninety Six in western South Carolina, this national historic site marks what used to be a Loyalist stronghold during the Revolution. The British considered the spot in South Carolina a strategic location. They fortified it as the war progressed, including with a star fort.

While the Continental Army attacked the fort and town of Ninety Six in May of 1781, they weren’t successful. The British controlled the fort until after the war.

Ninety Six National Historic Site shows that not everyone in the Colonies wanted an independent nation during the Revolutionary War. By some estimations, about 20 percent of the colonists were loyal to the crown, while most were on the fence. Many loyalists were older and richer than the rest of the population. By the time the Americans gained independence, they either returned to England or went to Canada. Their exit changed America’s identity for years to come.

Anyone who visits Ninety Six can find a red Java Taster or Straight Shot in Royale Frost waiting for them at the site’s visitor center. The medallion has the site’s star-shaped fort in the interior. It also has a cannon that both sides used during the war, highlighting the park’s military history. 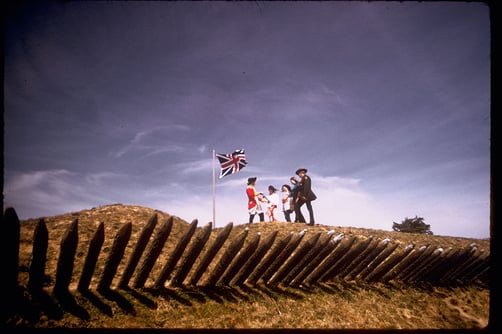 The Revolutionary War concluded at this battlefield in Yorktown, Virginia in 1781. Here, American forces routed the British and cut them off at sea with the aide of the French. Fittingly, the park also contains the site of the Jamestowne settlement. So, the beginning and end of America’s colonial past is captured in one place.

On the York River, Colonial National Historical Park shows important sites from the last major battle of the war. These include a series of earthen shelters and houses where the two sides negotiated the surrender.

There’s a reason we refer to the Battle of Yorktown and its aftermath as “the world turned upside down.” Throughout the war, the Americans were thought to be outmatched by the British army. Still, they prevailed through bitter odds and earned support from France and high-profile generals from abroad like Baron Von Steuben and Casimir Pulaski to help them gain independence.

Visitors looking for Sunset Hill Stoneware mugs to add to their collection can visit the Yorktown Battlefield Visitor Center near the entrance to the park. Potbelly mugs in Sunfire Red and Renaissance Voyager mugs in a Natural Clear glaze will be up for grabs, with the medallion on the front depicting the famous battle in vivid detail.