In the upstate town of Seneca Falls, N.Y., there’s a block of square buildings with windows facing Fall Street. While this building might not seem like much at face value, it was the backdrop for events that would change the course of history, started the women’s rights movement and eventually led to the Nineteenth Amendment of the U.S. Constitution.

Women’s Rights National Historical Park was the original site of the Seneca Falls Convention in 1848, wherein a total of about 300 people convened and discussed not only the need for women to have the right to vote, but to be seen as individuals and treated equally under the law.

In observance of Women’s Equality Day on August 26, the anniversary of the Nineteenth Amendment to the U.S. Constitution, we commemorate the struggle for this basic right. Here’s how this handful of square buildings in upstate New York changed the next 170 years and beyond.

Context of the Seneca Falls Convention

In most cultures throughout world history, society considered women property of their husbands or fathers. Society expected them to be completely subservient to them. Some societies, such as the Ancient Greeks, even disallowed women from leaving the home after they married.

After the United States officially gained its independence in 1783, things weren’t much better off. Using English common law left behind by the Crown, early American law suspended a woman’s legal existence once she married. It saw her as part of her husband. She could not own property, sign contracts, file for divorce or vote in any election.

Life may have been tolerable for women who had husbands who allowed some degree of control over their estate. But, others were subject to abuse. This marriage trapped them for the rest of their lives. Legally, they could not seek help and belonged to their husbands until either person died.

Just as many world-changing ideas happened in bars, the women who organized the Seneca Falls Convention did so over tea in 1848. Elizabeth Cady Stanton, a leading figure of the women’s rights movement, vented her frustration to her friends on a visit to upstate New York about her pent-up discontent with women’s subservient place in society at the time. The women organized a convention and announced it in the newspaper, giving eight days’ notice before the event.

The venue for this historic meeting was set at the Wesleyan Methodist Chapel in Seneca Falls, which stands restored next door to the park’s visitor center.

The Declaration of Sentiments at the Women’s Rights Convention

On that hot Wednesday in July, the Seneca Falls Convention commenced with Stanton compelling women in the church to recognize how the law had degraded her. She also urged each of them to take responsibility for her own life. 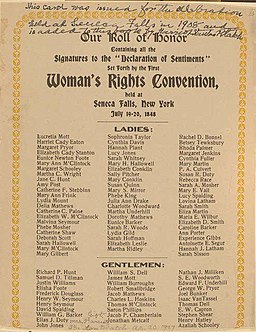 During the convention’s second day, 100 of the 300 people present signed the Declaration of Sentiments. Authored by Stanton, the Declaration of Independence served as a model for the document. It delivered the damning indictment that men had usurped divine authority by imposing “absolute tyranny” over women. Some of the sentiments in the declaration included:

These are a few excerpts from the list of sentiments that 100 women and men drafted and signed in 1848. The full Declaration of Sentiments can be found here.

The ideas in the Declaration of Sentiments might seem reasonable today, but at the time they sparked immense controversy. The Oneida Whig, a newspaper in nearby Oneida, N.Y. even branded the Declaration as “the most shocking and unnatural event in the history of womanity. If our ladies will insist on voting and legislating, where, gentleman, will be our dinners and our elbows? Where our domestic firesides and the holes in our stockings?”

How we got the Nineteenth Amendment

The 72 years between the first Seneca Falls Convention and the Nineteenth Amendment were not kind to suffragists. Women who attempted to vote were arrested and jailed for their crimes, while others who went on hunger strike in prison were subjected to forced feeding.

Suffragists continued to advocate for women’s rights despite this mistreatment and pressure from society as a whole. Notable feminists such as Stanton, the orators Lucretia Mott and Lucy Stone and many others advocated for years for women to be granted citizens’ rights under the law with few changes at the national level. Noted abolitionist and feminist Sojourner Truth actively advocated for the inclusion of of black, enslaved and impoverished women to be included in the movement as well, although the civil rights she fought for would not be felt by American women of all races and classes until almost a century later.

One of the most famous activists was Susan B. Anthony. Arrested in 1872 for attempting to vote, Anthony argued that she had the right to vote under the recently adopted 14th Amendment, which guaranteed the right to vote for all U.S. citizens, including those born in slavery. Nonetheless, the court sentenced her to pay a fine of $100.

Anthony responded, “I shall never pay a dollar of your unjust penalty.” She never did. However, she didn’t go to jail for not paying the fine, which kept her from going to the Supreme Court.

It would be almost 50 years before the right to vote regardless of gender joined the U.S. Constitution. Ratified in 1920, the first struggle for women’s civil rights came to fruition 72 years after the Seneca Falls Convention. Thirty-eight states ratified it in 1920, with the process not complete until 1984. That’s when Mississippi joined the rest of us in the 20th century.

Had it not been for these women’s bravery in the face of arrest, we may not have earned the vote. The measures of equal rights in the workplace that came later may also never had happened without the Nineteenth Amendment.

Today, as with many of America’s other national parks, Sunset Hill Stoneware’s custom stoneware mugs can be found at the visitor center in Women’s Rights National Historical Park in Seneca Falls. While the style and color may change depending on when you visit the park in Seneca Falls, you have a good chance of finding a mug in our purple Moonberry glaze and other striking colors such as Stormy Blue and Dark Mint with a sunflower medallion on the front. 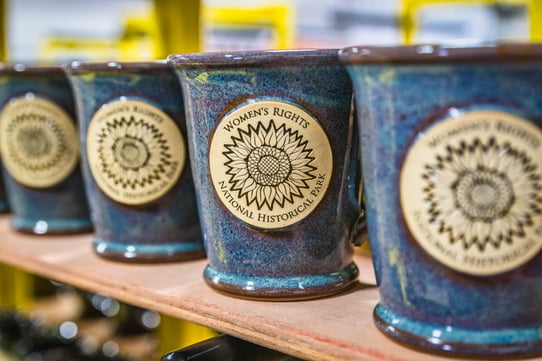 Moonberry is a popular glaze for the park, as purple was one of the three symbolic colors associated with the women’s suffrage movement, along with yellow and white.

Some may wonder why the park and the women’s suffrage movement opted to use sunflowers as its symbol. Stanton used the pseudonym “Sunflower” when she wrote articles for The Lily, the first women’s newspaper in the United States. In addition, when she and Anthony campaigned in Kansas in 1867, local suffragists used their state flower in their imagery. Thus, the sunflower and its colors became associated with the wider women’s suffrage movement.

There are some aspects of women’s rights that have a long way to go. Child marriage is still legal in many states, sex trafficking remains an enormous problem in America, along with a host of controversial subjects that we won’t discuss. However, the road would be longer today if these women did not courageously demand the right to vote. On August 26 and every day, we recognize their struggles to show that all men and women are equal.