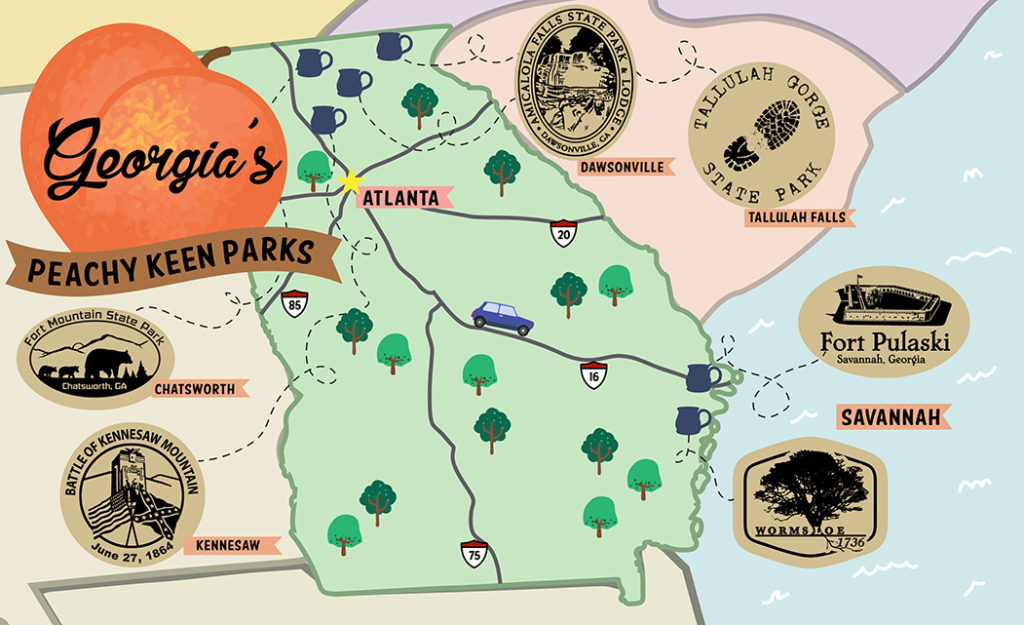 Looking for a warmer getaway while winter rages on, or thinking about spring break? Taking a trip down to the Peach State might be the way to go. There are dozens of state and national parks in Georgia, many of which carry Sunset Hill Stoneware mugs.

To get a taste of some of the wonders of Georgia, and to help you find unique coffee mugs from your trip, we have an itinerary with some of the parks in the Peach State with Sunset Hill Stoneware mugs.

Found in the northern part of the state, Amicalola Falls State Park serves as a paradise away from the crowds of Atlanta and as the southern gateway to the 2,100-mile Appalachian Trail. 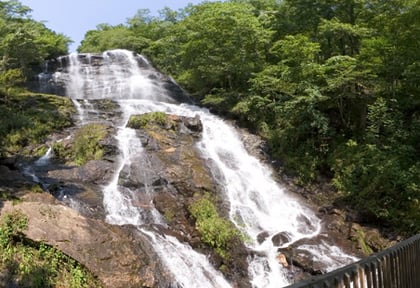 The park has also served as a backdrop for films and documentaries, including the 2015 film, A Walk in the Woods.

The park’s namesake is a 729-foot waterfall coming out of the lush Georgia forest. It offers many trails, zip-lining and wildlife encounters, plus more. For anyone looking for a getaway, the park even has resorts for a vacation in the heart of the South.

Visitors to Amicalola Falls State Park can expect to find state park mugs to take home with them. The most recent addition to the park’s collection includes the Sunset Barrel in Copperhead Run and a Greek Goddess in Northern Lights. The state park mugs depict a large owl on the medallion, with the name of the falls.

A hiker’s paradise, Tallulah Gorge State Park is tucked away near the border with South Carolina and packed with scenic trails, waterfalls, beaches and suspension bridges. Once a resort town, the gorge is now home to protected flowers and animals, including salamanders and birds. 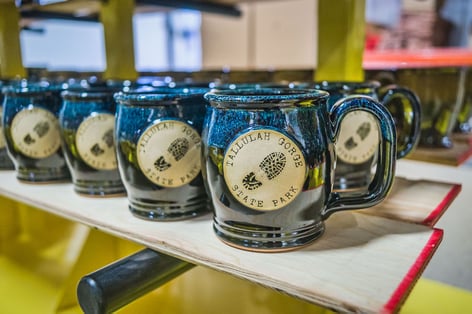 In addition to hiking and walking along the canyon rim, visitors can often explore the bottom of the gorge to get a closer look at its crystal-clear waters. With periodic water releases from upstream hydroelectric dams, there are opportunities to row or go  rafting down the gorge.

The state park hosts an interpretive center where you can find souvenirs, including unique mugs. Be sure to look for a Happy Soul mug with the imprint of a hiking boot on the medallion next time you visit. 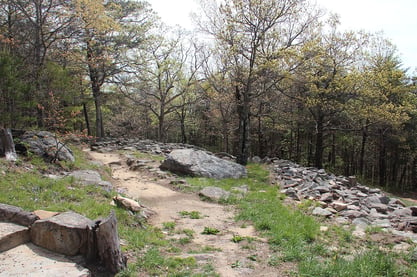 The rustic northern part of Georgia is home to numerous parks in and around Chattahoochee National Forest. Another park located within this forest in the town of Chatsworth is Fort Mountain State Park, named for the mountain on which it stands. The mountain gets its name from the park’s defining feature: a wall of stones that zigzags around its peak.

Archaeologists who studied the wall of stones think it is more than 1,000 years old. The park’s website theorizes that early Native Americans built the formation.

Along with the fort, the state park also features a lake with a beach, hiking trails, cottages and campsites for anyone looking to spend the night. With the views of Georgia’s mountains, Fort Mountain State Park is for the explorer in all of us.

Should you find yourself on a visit to Fort Mountain State Park, you may find a Java Taster or Wide Mouth to take home in commemoration of your trip in our Blue Moon and Zen Mist glazes. With its craftsmanship, these mugs are microwave, oven and dishwasher safe. We make them to last as long as the fort has stood.

Hidden away near old Savannah, Wormsloe State Historic Site preserves a plantation that was active during America’s darkest chapters. Originally established in the 1736, the plantation was the homestead of one Noble Jones, who developed it into a sprawling estate and tried to make his wealth in the New World. 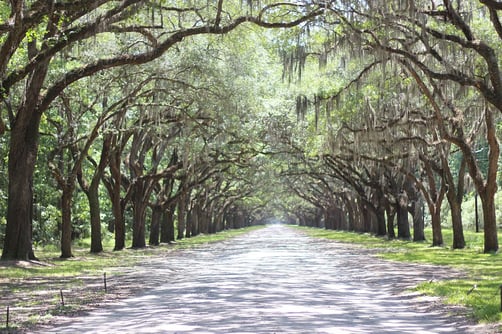 Throughout the 18th century, the plantation used slave labor to grow rice, vegetables and other crops. Jones also expanded the property’s size over his lifetime. He also installed an avenue lined with oak trees covered in Spanish moss for a stately southern look.

Today, the state park includes a trail to the plantation ruins, along with demonstrations. The entire estate features coastal forests, making for a beautiful venue to learn about America’s past.

To support the site’s preservation and educational programs, visitors can purchase mugs and other souvenirs. The park offers a variety of ceramic coffee mugs, including in our newer glazes. These mugs have the park’s name, the year the plantation opened and a silhouette of the site’s stately oak trees.

Named for the Polish-born Revolutionary War hero Kazimierz Pulaski, Fort Pulaski National Monument was a fortress to protect the United States from British invasion after the War of 1812. Located on an island outside Savannah, the fort was later taken by Confederate forces during the Civil War and was the site of a siege during the height of the conflict in 1862. 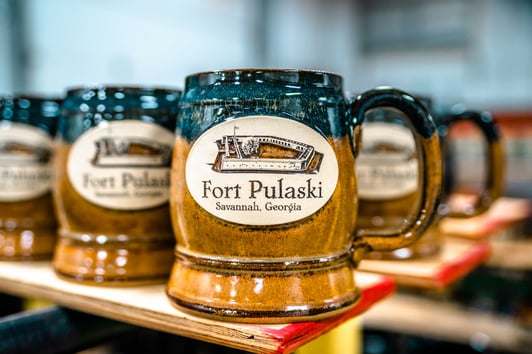 Before and after the siege, the fort was a prisoner-of-war camp, with Confederate forces controlling the camp first and Union soldiers using it for the same purposes after taking it. While the fort still held political prisoners after the war, it became a monument much later.

During the siege of Fort Pulaski, the fortress walls were bombarded with artillery, which damaged the fort and left marks on the walls that can still be seen today. The interior of the fort still stands as well, with reenactors routinely giving demonstrations. There are also rangers offering tours to teach guests about how the fort’s residents lived and fought.

The bookstore at Fort Pulaski National Monument offers stoneware mugs in many colors and styles. Most of them feature the fort on the medallion. One of the most recent additions to come through our shop includes the Dale Barrel in Copperhead Run. There are also a few rarer options like our Hilltop Chili mug in Sunfire Red and more.

Surrounded by the suburban sprawl of Marietta, Kennesaw Mountain National Battlefield stands on the site of one of the most important battles of the Atlanta campaign of the American Civil War.

Kennesaw Mountain was one of the last things standing between Union forces and capturing Atlanta in 1864. From there, the Union could take the rest of the South and end the conflict. There was little time for delay, with thousands dying over the course of the previous three years.

This national park restores and preserves much of the battlefield to how it was in 1864. It includes cannons, earthworks and a farmhouse where the battle took place. Park visitors can see these restorations, explore the battlefield and see reenactments of the fight.

If you visit the battlefield’s bookstore, the stoneware mugs you might find will depict scenes from the battle, with the flags of the Union and the Confederacy. This park is fond of representing Union colors, with glaze colors including Stormy Blue, Night Sky and Copperhead Run.