Famously, Sunset Hill Stoneware mugs can withstand extremely high temperatures. Legend among our employees tells of an apple farm that experienced a fire several years ago, with the only things to survive the fire unscathed being their unique coffee mugs and a handful of apples. Needless to say, our mugs are perfect for the bravest among us, the firefighters who put out blazes every day.

In addition to supplying mugs to law enforcement across the United States, Sunset Hill Stoneware makes handcrafted products for fire departments. These departments sell their mugs during fundraisers, use them as a point of pride for their firehouses and connect with their communities through them.

These are just a few of the fire departments and groups supporting them that use our products. Every mug shown was made for a local fire department or organizations that aid firefighters and their families. 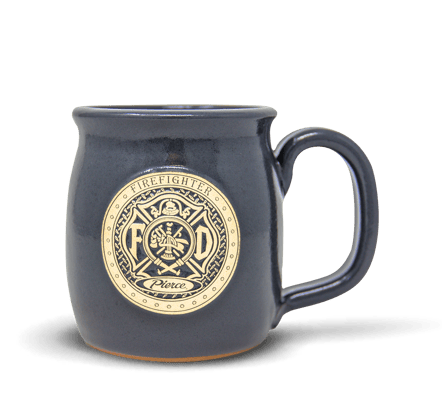 In Appleton, just a few miles from Sunset Hill Stoneware’s facility, is the assembly plant for Pierce Manufacturing. One of the country’s top firetruck builders, Pierce makes numerous types of fire engines and innovations for the industry. Their ideas keep firefighters safe on the job and make it easier for them to save lives.

Given how close we are, it’s only natural that we’ve worked with Pierce for years. They aren’t shy about trying out different styles and glazes, either. Their take on the classic firefighter’s badge is on everything from the Java Taster to our Ale House Barrel and more.

The most recent addition to Pierce’s Sunset Hill Stoneware mug collection is an Ale House Barrel in Galaxy Night. Visitors to the company’s location in Appleton will be able to find this mug for themselves. Whether they’re buying a firetruck or just coming to visit, they can find a gift to bring home. 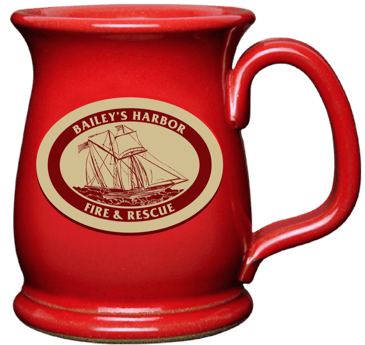 Located in Door County, Wisconsin’s answer to Cape Cod, Bailey’s Harbor is a tiny town on Lake Michigan. It’s popular with tourists during the warmer months of the year with sandy beaches and natural beauty abound. Serving the town of 1,000 people and the surrounding areas is Bailey’s Harbor Fire & Rescue.

The firefighters with Bailey’s Harbor Fire & Rescue are ready to respond to emergency calls all year long, whether visitors are having medical trouble in the summertime or during ice rescues in Wisconsin’s coldest winter months.

The department hosts fundraisers to support their activities throughout the year, including a Fourth of July pancake breakfast. However, in 2018 Bailey’s Harbor Fire & Rescue ordered its first set of unique coffee mugs.  They ordered ahead of its annual fundraiser at Bailey’s Harbor Autumnfest, a citywide event with events like an open house.

For its first set of mugs, the department had us make a Wide Mouth in Red. While this is a classic combination for fire departments, the artwork this Fire & Rescue team chose is in a league of its own. Like the artwork on its bright yellow equipment, the mugs feature a classic schooner. It’s a design that’s as much at home in a fire station as it is in your kitchen. Plus, it supports life-saving efforts in Wisconsin.

Serving towns outside Washington, D.C., Prince William County Department of Fire and Rescue is 21 fire stations that serve thousands of people in Virginia. According to the department’s statistics, over 37,600 incidents happened in the county. 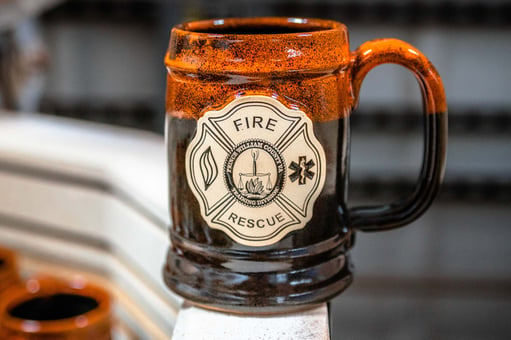 The steins the department ordered in late 2018 are an example of the quality that comes from pairing the right glaze, style and logo. The Ale House Barrel in our Autumn Fire glaze works well with the classic shape of the department’s badge. The combination is a change from the red shades associated with fire departments with eye-catching results.

These stoneware beer mugs were gifts to Prince William County Fire & Rescue personnel during the 2018-2019 holiday season as a thanks for their life-saving work during the year. Sunset Hill Stoneware looks forward to working with the department to help them with appreciation efforts.

Based out of Plano, Texas, Plano Firefighters Association is a union local serving firefighters and their families. According to the organization’s website, it advocates for safe working conditions for firefighters. It also supports charitable causes such as the Muscular Dystrophy Association and breast cancer research.

Plano Firefighters Association first asked us about making mugs for a fundraiser. We adapted the union’s logo into a medallion that would look bold on just about any glaze color. Its premiere design was an Executive Slim mug in Lava Rock, a glaze based in midnight black and topped with deep red that was well-suited to the people the organization supports.

Shortly after the Plano Firefighters Association announced their mugs, they sold out. We supplied them with their second order soon after that. We plan to make more mugs to help this organization of Northeast Texas firefighters during 2019.

Run by veterans, Fire Department Coffee supports firefighters with 10 percent of proceeds helping injured first responders. Departments across the country use this Rockford, Ill.-based roaster’s coffee to fuel them before dangerous shifts. 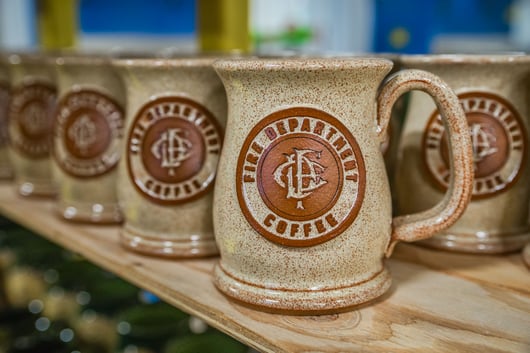 The coffee roasts from Fire Department Coffee range from classics like Original and Donut Shop Blends, to some surprisingly boozy twists with bourbon and rum flavors. These gourmet coffee blends are available for purchase through the company’s website or with special pricing for fire departments, first responders and military.

Our relationship with Fire Department Coffee began in 2018 when the company asked us to create mugs for them.

The mugs we first created for the coffee company, the Chief Mug, featured its logo on a natural clay medallion in our Oatmeal glaze. Accompanying it was the Halligan Mug. This is a Silvery Night mug named after one of the most valuable tools firefighters have.

As we continue to experiment with new glazes, we look forward to working with Fire Department Coffee more. We’re also excited to support some of the bravest people in our society.

Sunset Hill Stoneware gives mugs to fire departments all over the United States to support their fundraising efforts. Learn the steps to develop a fundraiser for your organization or another cause with our simple guide below.