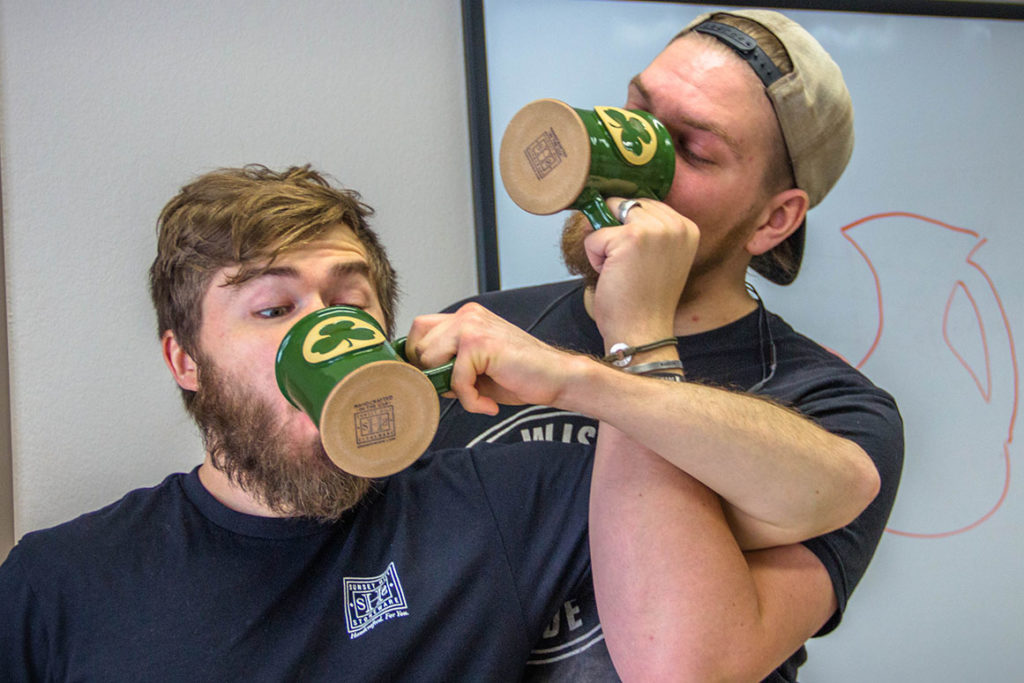 Ahh, St. Patrick’s Day. One of the few days of the year where that one guy in sales thinks he can get away with pinching you if you’re not wearing green. When you finish filing that report with HR though, there are plenty of ways to make the most of St. Patrick’s Day. These are just a few of our favorites. 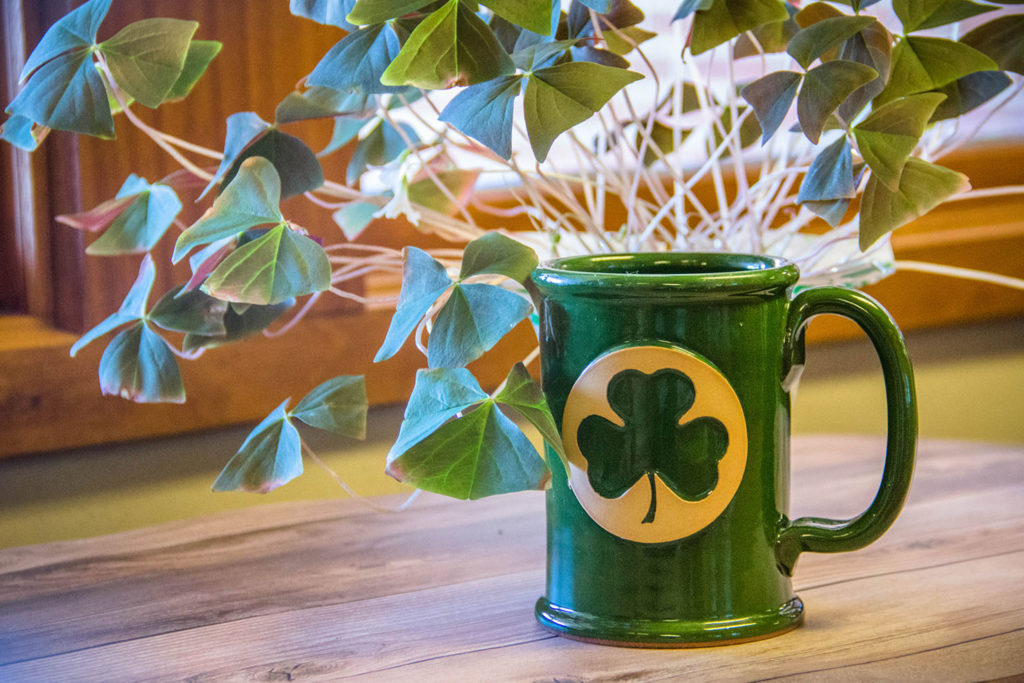 1. Start Out Strong with an Irish-Themed Cup of Coffee

Whether or not you decide to dress your coffee with some Jameson, Bailey’s or another spirit of your choice, get St. Patrick’s Day off on the right foot. Sunset Hill Stoneware has the Shamrock Shenanigans mug available on its Amazon page, featuring a three-leaf shamrock design in Lucky Charm. Like all of our products, we handcraft this stoneware coffee mug in the USA, and it’s safe in the microwave, dishwasher and oven.

You could also choose to drink from any of our customers who also make Irish-themed or St. Patrick’s Day-themed mugs. No matter which you choose, there’s a good chance we had a leprechaun working the pottery wheel to make it. After all, their tiny hands and wily ways make them amazing potters.

Translation: Irish is a difficult language. But, it’s special.

Yes, Irish—sometimes called Gaelic—is a language that people in Ireland still speak today, despite the British not allowing them to speak it in the past. Most road signs in Ireland have words in both English and Irish. The local police, known as An Garda, are legally required to read rights in either language upon request if they detain someone. Beyond that, Irish is still an everyday language in the western parts of the country. You’ll likely hear kids speaking it on their way to school in Ireland.

However, it’s not an easy language to learn. The grammar is unlike most languages in Europe, including English, with the verb in the sentence coming before the subject and the object. Figuring out the pronunciation is tricky, too. Luckily, there are tools for learning Irish. Duolingo is one such tool that breaks down the Irish language into lessons that you can use every day.

Ireland’s history spans back thousands of years, with forts and cairns across the island to match. Rome never conquered the Emerald Isle like it did most of Europe. But, the Vikings and the Normans did take over centuries later, and the English colonized it after that. Things went downhill from there.

The story of Ireland is one of sadness and triumph. The country overcame centuries of war, famine and poverty and finally gained its independence in 1937. However, the Emerald Isle still faced challenges up until the 1990s. During the period known as the Troubles, thousands of people died over sectarian violence based in British laws that favored Protestants over Catholics.

Have some Irish heritage in your family line? This is the perfect opportunity to trace your family’s history. Millions of Americans and Canadians have Irish heritage, so chances are that you’ll find one of your grandparents or great-grandparents had roots somewhere in one of the isle’s 37 counties.

Hundreds of poets, authors and playwrights have called Ireland home over the centuries. Jonathan Swift, James Joyce and Oscar Wilde were all born in Ireland. C.S. Lewis was born in Belfast before the republic became its own nation. There are also books of Irish poetry and legends that generations have passed down over the centuries.

While we don’t expect anyone to be able to read through Ulysses in a single day, it might be a good idea to revisit Lewis’s The Lion, the Witch and the Wardrobe or read Swift’s A Modest Proposal to get a taste of the literature Ireland has brought to the world. Does the latter proposal involve eating Irish babies? Yes. Is it one of the greatest pieces of satire to ever grace the English language, mocking British attitudes toward the poor and toward Irish people at the time? Also yes.

Life in Ireland and Northern Ireland is better than it was even 20 years ago during the Troubles. However, the remnants of strife between Protestants and Catholics in Northern Ireland still affect life there today. Organizations like the Ulster Project dedicate their work to promoting peace in Northern Ireland and dismantling the political differences between the two groups. Their methods involve bringing teens from both groups in Northern Ireland to American cities for a month during the summer, where they can meet each other somewhere away from the tension they might find at home. Once they’re in the U.S., the teens stay with an American their age and connect with each other in a place where being Protestant or Catholic doesn’t impact friendship.

Even though the Troubles are long over, the Ulster Project’s work is still necessary for fostering peace. Take some time on St. Patrick’s Day to learn about this program and possibly volunteer or donate to this cause.

There are also eco-friendly charities that work in Ireland. After centuries of deforestation from climate change since the Ice Age and land development, just 1% of Ireland was forested in the 20th century. Now though, both the Irish government and non-profit organizations are working to reforest Ireland. The official goal is to have 17% of the country covered in woodlands. This will involve planting hundreds of millions of trees in an overall effort to combat climate change.

You can purchase a tree that organizations like Mossy Earth plant on abandoned Irish farmland to help the country reach this goal.

No matter what you choose to do on St. Patrick’s Day, there are lots of ways to make more of it than you normally would. Until then, top off your favorite stoneware stein with your favorite Irish beer and enjoy this holiday celebrating Irish culture.

These activities can make your St. Patrick’s Day one to remember. However, in the interest of public health, you might want to consider trying the following activities in the future.

6. Try Some Irish Music and Dancing

Irish music and dance are known all over the world in the form of Celtic bands and Riverdance. There are hundreds of Irish bands that tour around the country, especially around St. Patrick’s Day. You might even find some of them in your local Irish bar performing classics like Whiskey in the Jar or Molly Malone. But, if you’re looking for a taste of the music currently coming out of Ireland, get tickets to see a band like We Banjo 3, The Chieftains or The High Kings. These three groups and dozens more either provide their own take on traditional Celtic music or adapt it with other genres. These groups also frequently work with local Irish dance schools.

Riverdance also has revival tours every few years. However, Irish dance goes beyond what you see at these shows. Try taking a class or two for yourself to see if you like it, but be aware—it’s more strenuous than it looks.

Not in the mood to sweat? Look for a ceili. These parties still feature traditional Irish dancing, usually in groups with set dances passed down for centuries before dance masters finally recorded them in 1939. Churches, community centers and Irish heritage centers all over America host ceili dances during the St. Patrick’s Day season. If not, you can just as easily throw a party and make your own, as long as you have five other friends to dance with you and an internet connection for reference.

7. Have Some Irish Food 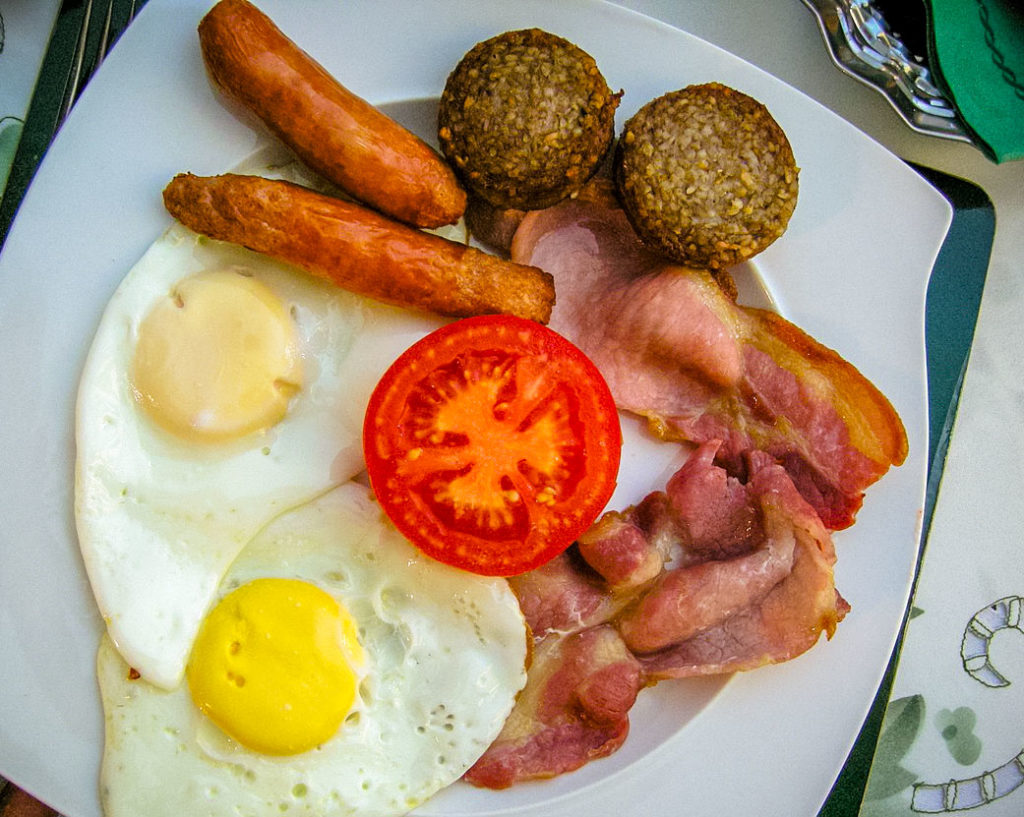 Corned beef and cabbage is overrated. It’s also not authentically Irish, since corned beef didn’t exist over there until recently. Instead, if you know you’re going to partake of Guinness, Smithwick’s or another Irish beer on St. Patrick’s Day, go for a full Irish breakfast. This usually consists of eggs, a type of bacon called rashers, sausage, grilled tomatoes or mushrooms, and both white and black pudding. While white pudding might be similar to the sausages you know and love, black pudding usually contains blood. Don’t let that turn you off from trying it at least once though—it’s sweet, savory and a good way to sop up any remaining egg yolk.

Not in the mood for all that meat? Try boxty instead. It’s like a pancake made with grated potatoes, mashed potatoes and love. You can also pair it with almost any savory topping you want.

Other foods you might try for St. Patrick’s Day are fish chowder, soda bread and colcannon. All of these are meant to warm your soul from the inside, and you’re just as likely to find them in your local Irish bar as you are at a pub in Galway or Dublin.

Guinness is far from the only beer to come from Ireland. Other beers that inspired our Irish Stout glaze that you might want to try with your dinner include O’Hara’s, Murphy’s, Beamish and way too many others for us to list.